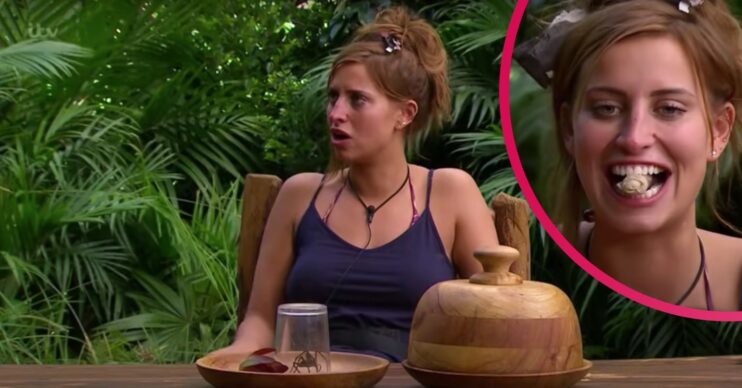 I’m A Celebrity: The most complained about Bushtucker Trial EVER revealed

The most gruesome trial that we certainly won't forget

I’m A Celebrity is known for it’s daring challenges – and ones in the jungle included stars eating all kinds of horrible critters.

However, while it may be fun to watch, some trials have gone too far and received lots of complaints from viewers.

One trial in particular sparked a very angry response from fans and has been dubbed the most complained about trial ever.

I’m A Celebrity trials: Grubs up in Bushtucker Bonanza

Ferne McCann’s final Bushtucker Trial on the 2015 show was the Bushtucker Bonanza.

This meant that the TOWIE star had to try and eat as many gruesome dishes as she could.

The final two dishes were the absolute worst and left viewers at home hanging off the edge of their seats.

The dishes were a bull’s penis and a live water spider.

After squealing at the sight of the critters, Ferne finally plucked up the courage to chow them down.

You could even see the legs of the spider trying to crawl out of her mouth. Yuck!

After watching Ferne’s gruelling trial, fans were outraged and branded it “disgusting”.

It led to many accusations from viewers that the show was using “animal cruelty for entertainment”.

One person tweeted: “How has the show not been done for animal cruelty? Crossed the line now.”

Another person wrote: “That spider died in the mouth of Ferne McCann. That is beyond animal cruelty. That is just cruelty in the extreme.”

During the outburst of angry fans, I’m A Celebrity reportedly received more than 1,500 Ofcom complaints about the horrific scene.

However, the media regulator confirmed that it wouldn’t be taking the investigation further – despite the backlash against the show.

It said that I’m A Celeb kept within its “well-established format” and it were unlikely to have gone beyond what audiences were expecting.

According to reports, ITV also pointed Ofcom towards a number of previous occasions when live critters such as grubs and creepy crawlies have been eaten as part of a trial.

An Ofcom spokesperson said at the time: “We received a number of complaints about a contestant on this programme eating a live spider as part of a challenge, but won’t be taking the matter forward for investigation.”