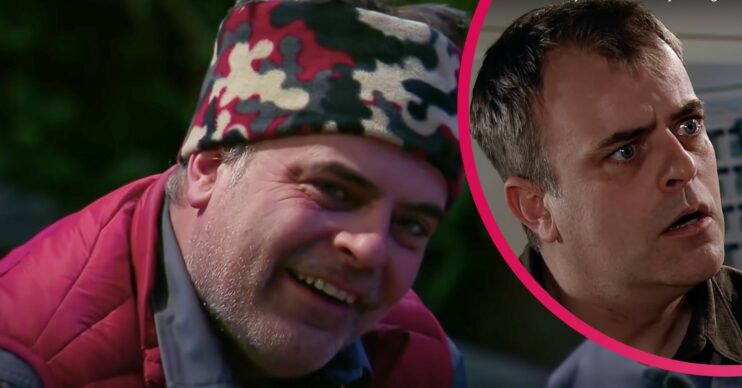 Simon's got his kit off - again!

The Coronation Street Twitter account has posted a picture of I’m A Celebrity star Simon Gregson posing nude on set.

The I’m A Celeb favourite seems to be covering his modesty with just a snowball in the snap for the Weatherfield charity calendar!

What is the picture of Simon Gregson all about?

Corrie fans will have had a shock this afternoon when the show’s Twitter posted the cheeky photo of Simon. The tweet reads: “It’s Snow joke! This picture of Steve may be too hot to handle!”

The picture in question shows Simon, in character as Steve McDonald, who he’s played since 1989, sitting in his taxi, naked! It appears that all Simon is wearing is his shoes and socks, a big orange scarf, and a green hat.

Simon Gregson is holding a snowball in one hand, whilst another snowball is all that covers the star’s modesty. The nude photo of Simon has been taken for the fictional Weatherfield charity calendar 2021-2022.

What did Corrie fans have to say?

Corrie fans were loving the picture of a naked Simon, some so much so that they wanted to buy a copy of the nude calendar for themselves!

“Can you actually buy this calendar?” one fan asked. “I would buy it!”

“Cringeworthy for sure. Praise be Steve keeps his clothes on all year round,” a third fan joked.

“There are some images which just can’t be unseen…My eyes! My eyes!” another fan of the show said.

What else has Simon Gregson been getting up to recently?

This isn’t the first time Simon Gregson has got his kit off recently. Only the other day, he and fellow I’m A Celebrity campmate David Ginola larked around the camp without their shirts on as they danced along to The Full Monty theme tune.

Though Simon was a late addition to the I’m A Celebrity camp, he has become a firm fan favourite. Simon has been saved from the public vote twice already. Arlene Phillips and Kadeena Cox left instead on Sunday (December 5) and Monday (December 6).

In last night’s show, Simon Gregson received a letter from his family. Fellow campmate Matty Lee read the letter out to the soap star.

“We’re all missing you like crazy. I’m so glad that everyone has seen the hilarious, kind, and mischievous man I married,” his wife, Emma, wrote. “Keep being you Simon because that is enough.”

Simon’s sons called him a “super dad” and “our hero” in the letter too.

“After all this time in here, it was just nice to have a little taste of home,” the star said after hearing from home.

What do you think of Simon’s cheeky snap? Let us know on our Facebook page @EntertainmentDailyFix.