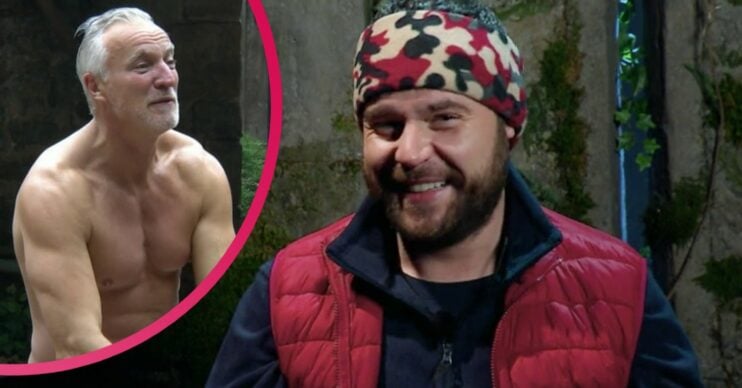 Some accused the Emmerdale star of 'playing a game'

I’m A Celebrity star Danny Miller has divided viewers at home as he continues to crush over David Ginola in camp.

The former Emmerdale star, 30, has made no secret of his love for the retired footballer, 54, since joining the ITV programme.

However, some fans are getting pretty fed up of Danny’s behaviour.

During last night’s show (December 5), Danny gushed over David after spending the night together on the camp floor.

The pair previously lost the Wishing Well challenge, meaning they had to sleep on the floor of the living quarters.

After waking up, Danny shared: “I have to be honest, I slept really well sharing body heat with David.

“It’s strange how I’ve had a better nights sleep sleeping next to him. I just feel safer.”

The actor went on to poke fun at his relationship with  fiancée Steph Jones.

He went on: “If David Ginola asked me to marry him then sorry Steph. The wedding venue would be booked and it would be a great wedding. Imagine the people coming to it – it’s tempting!”

Read more: I’m A Celebrity: Arlene Phillips becomes the first star to be eliminated from the castle

Later on, Danny was also caught crushing on the footballer during a topless moment with Corrie star Simon Gregson.

He told him: “You’re just a fine figure of a man!”

Commenting on Danny’s behaviour, Louise Minchin said: “Danny makes me laugh because he looks at David with an adoring eye.”

How did IAC viewers respond?

However, some viewers have found Danny slightly annoying.

Taking to Twitter, one said: “OK Danny give it a rest mate… we know you love David #ImACeleb.”

A second shared: “#ImACeleb l’m curious why #Danny keeps talking and fantasying about #David. He will do anything to stay in the castle.”

#ImACeleb l'm curious why #Danny keeps talking and fantasing about #David
He will do anything to stay in the castle.

Danny is becoming weird if I was his girlfriend I’d be a bit nervous I’m sure Danny is only joking about how he fancies David but I think David is scared. I know I would be. #ImACeleb

This bromance is keeping me alive 😫#ImACeleb pic.twitter.com/ZcroQmeO0N

A third tweeted: “It’s hilarious to see Danny [bleep] that he’s not as entertaining as Naughty Boy so he tries so hard with his act of being in awe of David, in hopes that the public relate to him #ImACeleb.”

Another posted: “Danny Miller says he’s bored & wants to do a trial. Yet could have done tonight’s trial but was quick to say to Matty, you have the phone call if up for the trial. Danny is playing this game well! Especially with his man crush on David #ImACeleb.”

A fifth shared: “Danny is becoming weird if I was his girlfriend I’d be a bit nervous. I’m sure Danny is only joking about how he fancies David but I think David is scared. I know I would be. #ImACeleb.”

Danny give it a rest mate

However, others defended Danny and David’s bromance.

Another posted: “This bromance is keeping me alive.”

A third added: “Does Danny’s wife have to be wary of David Gino here? The bromance is real #ImACeleb.”