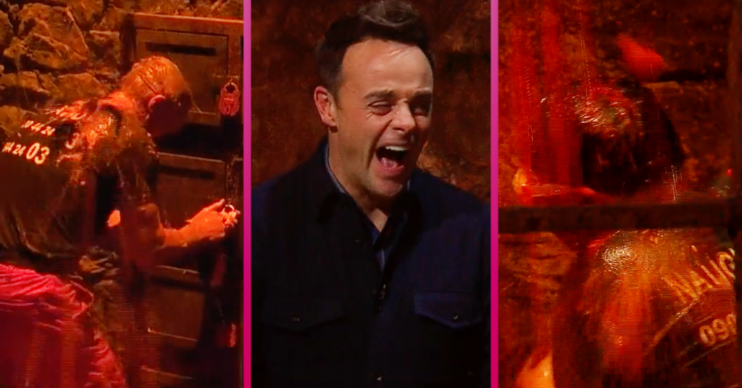 And, if a new teaser trailer just released by ITV is anything to go by, it looks like it’ll be a pretty messy one.

What happens to Naughty Boy in tonight’s I’m A Celebrity trial?

Another day, another trial for Naughty.

He didn’t look too pleased as his name was announced live on ITV last night (December 3) and he appears even less pleased as a load of guts land on his head in the trial tonight.

The trio are taking part in the Cells of Hell trial, which sees them locked in individual jail cells.

They have to rummage for keys in the blood and guts and use them to unlock the doors.

As David and Adam remain silent, apart from one “Oh my god” from the Frenchman, Naughty continues wailing, as offal, fish guts and rotten fruit and veg rain down.

Read more: I’m A Celebrity fans are all asking the same thing about Frankie’s luxury item

The aim of the trail is for the trio to find the keys, pass them through the bars to the next contestant, and on to Naughty to unlock the final case and claim the star.

How do they do?

ITV has so-far remained tight-lipped on the outcome of the trial.

However, hosts Ant McPartlin and Declan Donnelly appear to find the trial – or rather Naughty’s reaction – hilarious.

Although it appears the same can’t be said for Adam, who can be heard during the clip chivvying Naughty along.

“Naughty!” he can be heard shouting.

How will I’m A Celebrity fans react to tonight’s trial?

Here’s hoping the trial, which does look pretty funny, can change viewers’ minds when it comes to this year’s show.

Lashing out on Twitter last night, they declared that the show has lost it’s sparkle since coming back from its enforced Storm Arwen break.

So how many stars will they get? There’s only one way to find out…

I’m A Celebrity airs tonight (December 4) at the slightly later time of 9.15pm on ITV.