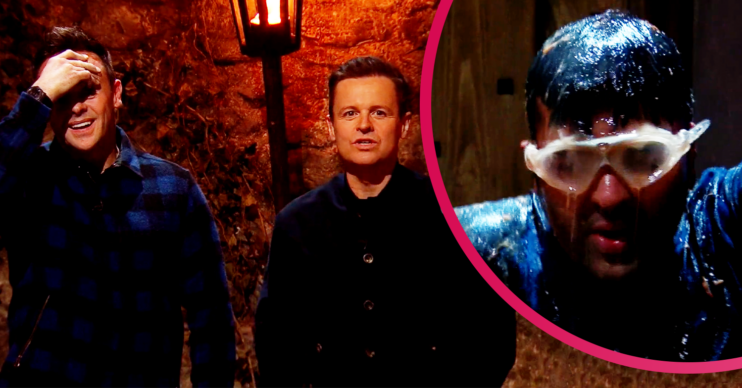 Ant and Dec look pretty exasperated with the star!

Today’s I’m A Celebrity trial spoiler has dropped (November 26) and Naughty Boy is given quite the shock.

And, after initially taking his time and being told to hurry up by hosts Ant McPartlin and Declan Donnelly, he was soon heard screaming his head off.

I’m A Celebrity spoiler: Naughty Boy gets a shock

The hosts are seeing telling Naughty Boy: “Your time will start on the klaxon.”

Showing no sense of urgency, despite only having two minutes for the task, Naughty is seen slowly opening the closet and declaring: “Oh, very nice.”

“Remember, two minutes,” Ant tells him. “Best to get a move on.”

“You’re not picking a jacket,” Ant quips. “You’re looking for a star on a pole.”

“Oh,” Naughty declares as he spots the star that’s literally right in front of his eyes.

However, disaster strikes as he attempts to nab the star from its pole.

“Aragh!” he screams as fish guts and offal give him quite the surprise when they drop on his head.

“What the Rasta Mouse was that,” he added as he continued to try and unhook his first star.

“Woah woah woah,” he declared, as host Dec informed him: “One minute left.”

He’s heard screaming: “No!” as the clip ends.

So how does Naughty Boy do in the I’m A Celebrity trial tonight?

Of course, ITV is remaining tight-lipped about the outcome of tonight’s trial.

And, while it’s not known exactly how Naughty Boy does in the trial tonight, it seems certain that the campmates will go hungry given the speed at which the producer can be seen moving through the trial.

Ant earlier declared: “I thought he was pumped up for this trial,” as Dec chuckled.

You can see how he does when I’m A Celebrity airs on ITV at 9pm tonight.