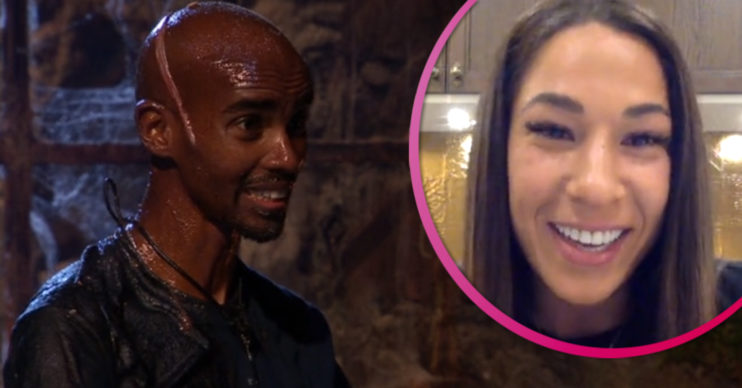 I’m A Celebrity: Mo Farah’s wife speaks out about his ‘disappointment’ over trial

He didn't take it well

I’m A Celebrity star Mo Farah’s wife has spoken out about the disappointment he felt after his Bushtucker trial on Friday’s show.

The Olympic legend faced Fort Locks and bagged nine out of a possible 12 stars.

What did Mo Farah’s wife say about his I’m A Celebrity trial?

Speaking on spin-off show The Daily Drop, Tania said: “I was crying laughing. I just thought it was brilliant.

“I didn’t think he’d react as scared as he did. He didn’t know what was in there so probably thought it was snakes in every box.

“Nine out of 12 [stars] is not bad. He’s always looking for the maximum, he always wants to perfect any challenge he does – so for him, anything less than 12 would have been a failure, but that’s just the way he thinks.

“Even with board games with the kids – he doesn’t want to lose at anything.”

What is Mo’s biggest fear?

Mo also came face-to-face with his biggest phobia, snakes, but mum-of-four Tania didn’t have any sympathy.

He doesn’t want to lose at anything.

She said: “That was probably my favourite part of the show – I’ve been waiting for him to face a snake for years – it’s his biggest fear by far.

“He’s petrified by them. I saw it on his face.

“It was like he went into a trance. He froze. It was like he’d left his head for a minute, I just thought that was brilliant.”

Mo is definitely out of his comfort zone while taking on the show.

Tania added: “It’s a really different environment for him. Eat, sleep, train that’s been his life for the past 12 years.

“To do something like this takes him out of his comfort zone. I wasn’t sure how he’d get on.”

What did Mo have to do on his challenge?

Meanwhile, Mo had fish guts, offal and critters dropped on to him.

He said: “That was not easy. Going home with nine stars, I am disappointed. I’ll just have to explain to the teammates.”