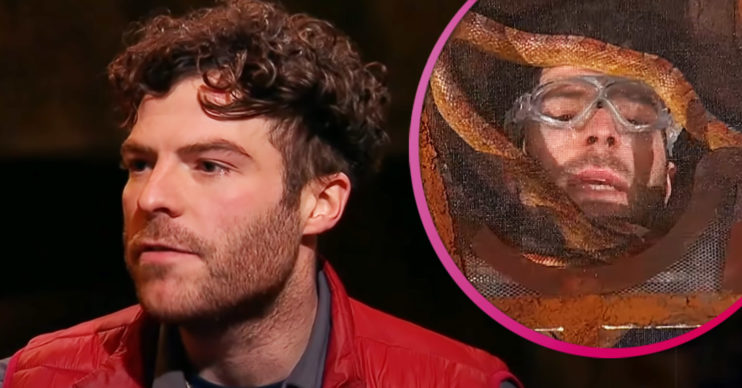 I’m A Celebrity: Jordan North hits back at claims he faked fears during trials

Jordan struggled with the Bushtucker trials

I’m A Celebrity star Jordan North has hit back at claims he faked his fears on the show.

The Radio 1 DJ struggled with the Bushtucker trials and even threw up on a cliff during the launch episode last month.

The star went on to face a string of gruesome and scary trials and recently admitted he suffered a breakdown before one of them, which viewers didn’t see.

However, some viewers accused Jordan of pretending to be terrified and now he’s responded.

What did Jordan North say?

The star told The Sun on Sunday: “I’ve heard a couple people saying, ‘Was he playing up to it? Was he faking it?’ I mean, how can you fake being sick?

“If you see me in that Viper one, I was physically shaking beforehand. You could see me sweating. I was that scared.

“Genuinely, what you see is what you get. There was no playing up to cameras, I was totally myself, all of my family and friends have said that as well.”

Meanwhile, Jordan admitted his plan was to “keep my head down and only do a couple of trials”.

The star said he thought his other campmates like Shane Richie and Beverley Callard would get picked because they’ve “got loads of fans and followers”.

During his exit interview during Friday night’s final, Jordan said he faced all his fears.

He said: “Stupidly I thought I could get away with avoiding doing any trials and at best, come out midway.

Jordan finishes in second place on I’m A Celebrity

“I spewed on a cliff and I thought I could maybe cope with bugs, I could possibly do the eating ones.

Jordan finished in second place after Giovanna Fletcher became Queen of the Castle.

However, fans thought Jordan deserved to be winner as he had come so far on the show.

One person said on Twitter: “Jordan deserved to win, he’s been hilarious and has overcome a lot.”

Another wrote: “Giovanna was the loveliest woman.. but I really think Jordan deserved to win.

“He overcame so many fears and had the biggest growth in there!”

Did you enjoy I’m A Celeb this year? Leave us a comment on our Facebook page @EntertainmentDailyFix and let us know.