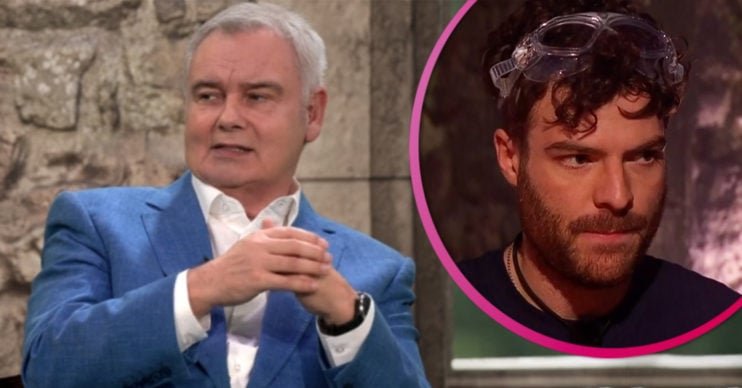 Jordan has struggled when facing the Bushtucker trials

I’m A Celebrity star Jordan North could be “bluffing” when it comes to his fears, suggests Eamonn Holmes.

The This Morning presenter appeared on Friday’s spin-off show The Daily Drop to discuss the latest antics in the castle.

On Thursday night, Jordan faced another Bushtucker trial and won 12 out of 12 stars despite his fears.

What did Eamonn say about I’m A Celebrity star Jordan North?

Speaking on the show, Eamonn said: “There’s just no escape and yet he just head down, he got on with it. I think I’d be scarred.

“But either that or he’s bluffing us all along… he gets full score, full stars.”

Guest and former campmate Ferne McCann laughed: “Are you saying it’s all an act?”

However, Eamonn replied: “No, I’m saying if you had that sort of inquisitive mind, you could look and say, how come one minute he goes from being literally physically sick…”

Ferne added: “Talking from experience from doing the trials, trust me I did a lot of them, I never overcame any fears.

Either that or he’s bluffing us all along… he gets full score, full stars.

“I still hate spiders, snakes. So I get the whole journey.

“I think it’s genuine fear because he’s shaking and taking himself to his happy place isn’t he?”

Eamonn then admitted: “As soon as they mentioned the ‘t’ word, toad… there was no way I would have put my hand on a green slimy toad.”

Last night, viewers said they felt “proud” of Jordan as he smashed the trial.

Earlier in the series, the radio DJ had threw up over the thought of abseiling down a cliff edge.

Meanwhile, when facing a trial with fellow campmate Shane Richie, Jordan almost pulled out as he admitted he couldn’t face it.

What did I’m A Celebrity fans say?

However, each time, he’s competed the challenges.

Another added on Twitter: “I’m actually bursting with pride for Jordan! So proud of him haha.”