Each of them had to put their head into a clear Perspex helmet and their hands into a box.

They had two minutes to release two stars using the tools provided.

There were two stars each, making a total of 10 possible stars and 10 meals for camp.

And poor Jac was reduced to tears just watching her campmates in action, ahead of her turn.

"I feel like this is too soon to cry but I'm going to cry"" she said. Jac was working herself up watching the others (Credit: ITV)

Going last, Jac told Ant and Dec that her biggest fear is spiders, before revealing her shaking hands.

And then something magical happened. Taking deep breaths to calm herself, the former EastEnders star unscrewed first one star, and then a second.

Her campmates cheered as they were informed they'd won seven stars collectively.

But it was all too much for the mum-of-two, who burst into tears again. 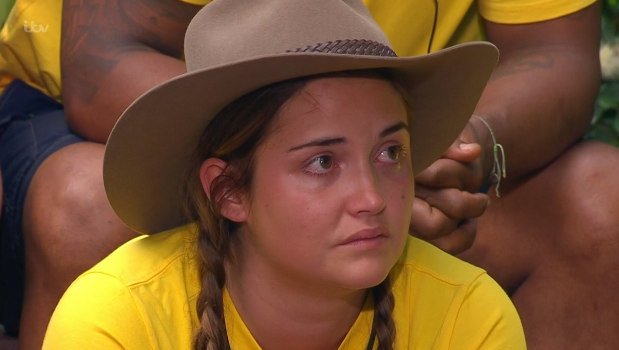 We can almost smell the fear (Credit: ITV)

And, although I'm A Celeb viewers aren't normally fans of campmates turning on the waterworks, they were seriously impressed with Jac's determination.

So much respect and a few tears for #jacqueline in that Spider trial!!!! Well done Girlie!! #ImACeleb #imacelebrity

Anyone else absolutely bawling at Jacqueline? Just me? 😭😭 #imacelebrity

That was outstanding from from Jacqueline 👏👏👏👏👏#ImACeleb #imacelebrity #imaceleb2019 #ImACelebrityGetMeOutOfHere pic.twitter.com/FLmywKYtTX

What do you think of Jac on the show so far? Leave us a comment on our Facebook page @EntertainmentDailyFix and let us know.