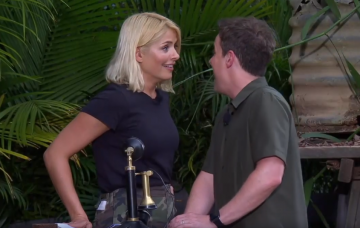 She's forced to look away

I’m A Celebrity’s Sair Khan and Malique Thompson-Dywer are set to face tonight’s Bushtucker trial and unfortunately for them, it’s the dreaded eating challenge.

The trial, Dreaded Deliveries, involves Coronation Street actress Sair and Hollyoaks star Malique eating a series of disgusting meals being delivered to them.

In a preview clip for tonight’s trial, host Holly Willoughby is left mortified as she watches Sair eat a cow’s teat.

Trial Tease: It’s a takeaway, but not as you know it… 🤢@SairKhan and @officialmal_ face a stomach-churning dinner in tonight’s Bushtucker Trial. Will it be too hard to swallow?🍴#ImACeleb pic.twitter.com/8Hxe13XQXY

In the clip, Holly tells Sair: “Right Sair, it’s back to you.”

As Sair opens a box to unveil the cow’s teats, Holly looks away and says: “Oh my god. That is teat-a masala.”

Sair’s jaw immediately drops as she exclaims: “No!” to which Dec tells her: “It’s a cow’s teat.”

“I love milk chocolate! So… great! I’m really looking forward to it,” as Holly is forced to look away.

Dec says: “Let’s have a look at it. It does look quite chocolatey.”

Holly whispers: “What is wrong with you people?”

Sair then picks up the teat, places it in her mouth and sucks it up as she starts eating it.

As Sair sucked up the teat, Holly and Dec burst into laughter.

Will Sair and Malique be able to bag enough stars to bring some decent food home to camp?

On last night’t show, viewers saw Anne Hegerty bring seven out of 11 stars back to camp after she faced Hellish Hospital.

She had to explore a series of rooms filled with bugs, pigeons, snakes and fish guts to try and find stars.

The star – who has Asperger’s syndrome – made it to the final room in which she had to climb through an air vent and collect the final stars.

However, Anne chose to pull out of the trial as she told hosts Holly Willoughby and Dec Donnelly: “No, I’m sorry. I’m A Celebrity Get Me Out Of Here.”

Read more: I’m A Celebrity fans spot something about Anne Hegerty as she bosses trial

Will Sair and Malique be able to bring home the bacon tonight?

Tune in to I’m A Celebrity on ITV at 9pm to see.

Do you enjoy watching the show’s eating trials? Leave us a comment on our Facebook page @EntertainmentDailyFix and let us know what you think.