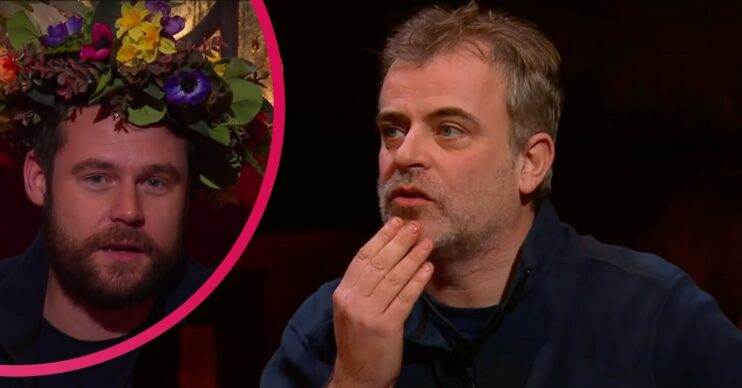 The wife of I’m A Celebrity star Simon Gregson sent a touching message to Emmerdale star Danny Miller via Instagram after the I’m A Celebrity final last night (Sunday, December 12).

The message came after Danny beat Simon to be crowned the first-ever King of the Castle.

After three long, difficult weeks, I’m A Celebrity’s nineteenth series came to an end last night. The results were announced, and fans learned that Emmerdale star Danny Miller was the winner.

When he was revealed to be the I’m A Celebrity 2o21 winner, Danny said he was “speechless for once”. He also admitted that being crowned King of the Castle was the best thing to ever happen to him “bar my son”.

Fans of the show took to social media to celebrate the soap star’s win.

“Aww over the moon for @DannyBMiller well deserved!” another said.

“Well done DANNY. Well deserved! You were yourself. So happy for him!!!” a third said.

But it wasn’t just fans of the show congratulating Danny on his I’m A Celebrity victory. Simon Gregson’s wife, Emma, took to Instagram last night to congratulate 2021’s King of the Castle.

Emma posted a photo of Danny with a lengthy caption on Simon’s Instagram for his 54,000 followers to see.

“A truly deserved winner! What a journey Danny has been on…” she wrote. “I’m so chuffed for Steph and Albert and all of his family and friends.

“As his [Simon] wife, I’m now signing off,” she continued. “Thank you from the bottom of my heart for all your support and kindness over the last few weeks. You’ve been truly awesome and I can’t wait to show Si how much he’s loved.”

Emma then went on to thank all of Simon’s fans again before signing off with, “Congratulations Danny!!!!!!!”

What did I’m A Celebrity fans have to say?

Simon’s followers took to the comments of his wife’s post to sing the I’m A Celebrity star’s praises.

“Gutted Simon didn’t win. He is one funny bloke. It was like watching Steve McDonald every day. Well done Simon,” one fan wrote.

“Simon was the best and was our winner,” a third fan said.

“Congratulations Danny,” another of Simon’s fans said. “Well done Simon you were incredible too.”

Danny was reunited with his partner and son in an interview with Lorraine today (Monday, December 13). The ex-soap star was surprised by the appearance of his wife-to-be, Steph, and baby son, Albert, as he discussed his I’m A Celebrity win.

Are you happy that Danny Miller won the I’m A Celebrity final? Head to our Facebook page @EntertainmentDailyFix and let us know!