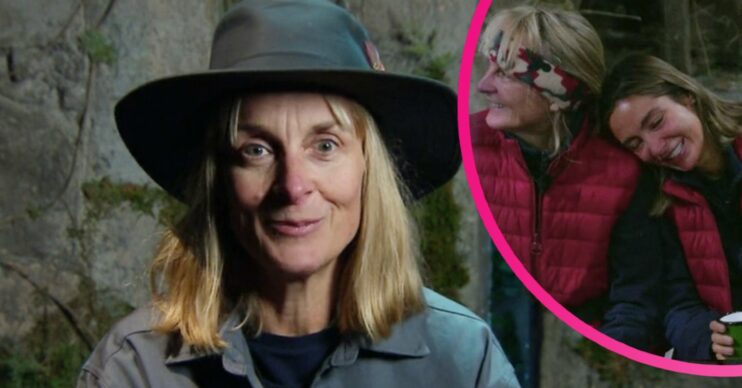 The two shared a close bond in the castle

The former BBC Breakfast host was axed from the ITV programme on Thursday, after facing the bottom two with Matty Lee.

As she left the camp, Louise showed her support to the last woman standing.

Turning to Frankie for a hug, the broadcaster said: “I’ll miss you! You take care.”

She then whispered in Frankie’s ear: “Go win it.”

Frankie is the only girl remaining in the camp.

During her exit chat with Ant and Dec, Louise admitted that she was “disappointed” to be the fourth female eliminated.

“There’s some great girls and women in there.”

Speaking about Frankie, Ant asked: “Will she struggle in there without you?”

Louise responded: “I think she’s going to find it tough, but I said to her go win it. Hopefully she will!”

Read more: Louise Minchin announces next project after I’m A Celebrity exit… and it might not be what you think

“She gets anxious but she’s absolutely incredible. I just hope she can get through these last few days.”

It comes as no surprise over who Louise picked as her winner.

The star concluded her exit chat, saying: “There’s only one Frankie Bridge!”

Did Louise just say to Frankie you’ll win it??? #ImACeleb

Sorry Louise, I don't think Frankie has a chance in hell, I think a King is guaranteed this year, and quite right too!*! #ImACeleb

A second asked: “Did Louise just say to Frankie you’ll win it??? #ImACeleb.”

In addition, a third wrote: #ImACeleb is it really worth watching I’m A Celebrity. Louise when leaving hugged stupid Frankie and whispered to her you’re going to win lol… it’s fixed.”

However, one posted: “Sorry Louise, I don’t think Frankie has a chance in hell, I think a King is guaranteed this year, and quite right too!! #ImACeleb.”

Earlier today, Louise appeared on Good Morning Britain to speak about her castle departure and her possible next career move.