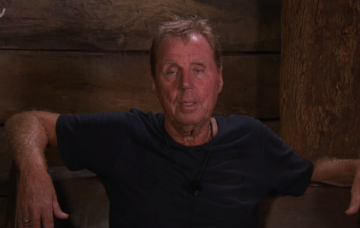 I’m A Celebrity viewers heard from Harry Redknapp’s wife Sandra as the campmates received letters from their loved ones.

The stars have now spent more than two weeks in the jungle away from their families and got to hear from them during Tuesday’s show.

Viewers have been hooked by the love affair between football manager Harry and his wife of 54 years, Sandra.

Harry, 71, has been telling his campmates about his marriage and they got to hear from Sandra herself as pop star Fleur East read out her letter.

It said: “I have always been proud of you but the last two weeks watching you has made me realise your strength and determination to succeed at anything life throws at you.

“But I never thought it would mean eating fish eyes! You have made us all proud. We miss you terribly but I am being well looked after by everybody. The family love you and are so proud of you. Love you always.”

Actress Emily Atack’s letter was from her mother Kate and was read out by John Barrowman.

It said: “You’re so funny and your beautiful freckly face without makeup reminds me of when you were nine years old.

“I know that in John you have made a friend for life. Keep being kind to others and keep dong the impressions.”

It said: “I wanted to take this opportunity to tell you how very proud I am of you, not only in terms of how you are doing in the camp, but most importantly how proud I am that you’re my dad.”

The other celebrities huddled around the camp while their own letters were read out.

Viewers watching from home were left emotional as they watched the celebrities open their letters.

One person said: “Fully bawled my eyes out at the letters from home on #ImACeleb tonight.”

Another wrote: “Just hearing people reading letters made me well up..Just thinking about everyone crying makes me have tears already.”

@imacelebrity just hearing people reading letters made me well up..Just thinking about everyone crying makes me have tears already #ImACeleb

Others couldn’t get over Sandra’s letter to Harry.

One person said: “OH MY GOD I am bawling at Sandra’s letter and Harry’s reaction ripped me.”

Listening to Sandra’s letter to Harry like #ImACeleb pic.twitter.com/QzDrqaAvut