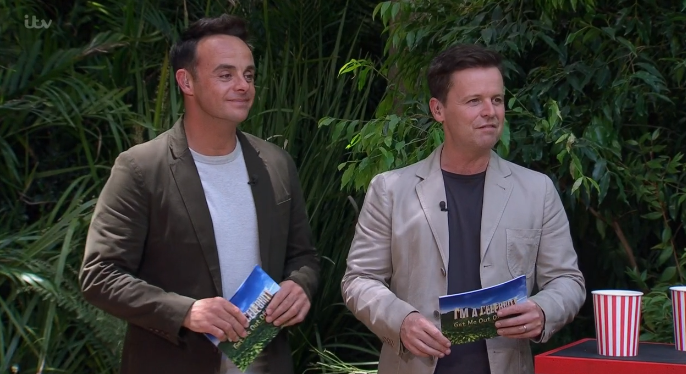 Fans of I’m A Celebrity…Get Me Out Of Here! have called the show ‘rigged’ after Ian Wright was pitted against Andrew Maxwell in the battle for immunity.

With the first vote-off looming, the campmates are battling it out to avoid being the first to go.

With half of them ‘cursed’ and the other half ‘uncursed’ it came down to a battle at the ‘sickening cinema’ as to who would be be safe from the first public vote.

Ant and Dec lined up the celebs with two at a time going head to head in downing drinks.

But they were no ordinary drinks – blended pig’s brains, penis, and fish eyes were on the menu.

Ant and Dec were picking the names out of a hat as to who would be pitting against who, but it seemed coincidental that Ian and Andrew were chosen to face each other.

The pair have been going at it all week as Ian has been accused of bullying Andrew.

Andrew’s wife has spoken out in support of Ian and said Andrew is a grown man who can fight his own battles.

During the drinking challenge Ian managed to down the drink quicker than Andrew securing him immunity from the vote.

“Andrew versus Ian? How [bleep] scripted is that?” queried one.

Andrew vs Ian… What were the chances? 😂 #ImACeleb

Elswhere, Cliff Parisi was ruled out of the trial yet again after ‘falling ill’ just before it began.

He nominated James Haskell to stand in for him, but James lost out to Myles Stephenson.

When James stepped up to drink for his own immunity though, he smashed it in seconds.

He even hinted he had thrown it so Cliff had a chance of going home.

His comments didn’t go unnoticed by fans who have demanded he get punished.

So are they just going to let James get away with throwing the trial when he was playing for cliff, he admitted he did to Caitlin.#ImACeleb

So against Miles… James drank slowly. But he manages to down the drink in literal seconds when he’s against Andy?! We literally saw James plotting about it with Caitlyn! Poor Cliff! 😲 I’m actually in shock! James does realise there are cameras recording, right?! #imaceleb

I’m not saying James lost on purpose for Cliff 😂 who I’m kidding. He definitely did it on purpose. I can’t fault him to be fair, what does he bring to the show? #ImACeleb

Elsewhere this evening, fans were left swooning over Roman Kemp after he serenaded his fellow campmates with Ed Sheeran songs.

Turns out, the Capital FM DJ can actually sing!

It wasn’t long before Twitter was in meltdown over Roman’s voice, with many calling him ‘the perfect man’.

Roman just sang one of my fave songs #ImACeleb pic.twitter.com/9j7XOa4dw7

So Roman can sing AS WELL? I’m DONE #ImACeleb

Roman Kemp singing ummm get in my uterus #ImACeleb

ROMAN CAN SING
THIS MAN IS PERFECT #ImACeleb