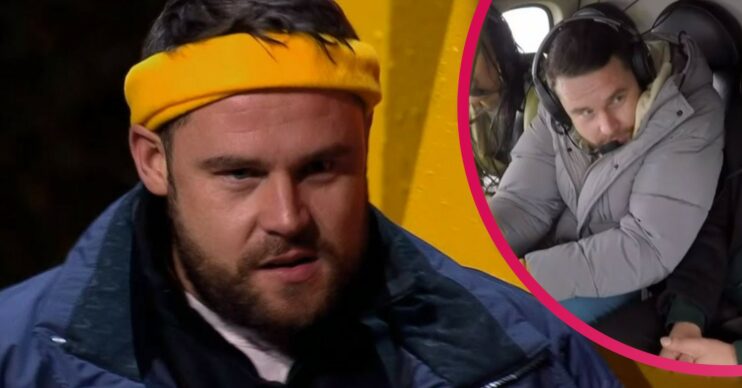 I’m A Celebrity: Danny Miller will get picked for every trial, viewers predict

I’m A Celebrity star Danny Miller will get chosen for every trial, viewers are already predicting.

The series returned to screens tonight as the celebrity line-up headed for Gwrych Castle in Wales.

But some were already petrified including Emmerdale actor Danny, who felt sick during a helicopter ride.

What happened with Danny Miller on I’m A Celebrity?

As the celebrities arrived to meet each other, it wasn’t long before they were thrown into their first challenge.

Danny admitted: “The idea of getting in that helicopter terrifies the life out of me.  The last thing I want to do is be sick all over the celebrities.”

But as they got into the helicopter, Danny’s fears weren’t getting any better as he held onto a sick bag.

*The sick-bag has entered the chat*

Danny really wasn’t lying when he said he’s the worst gipper in the world 😂 🚁 #ImACeleb pic.twitter.com/IqckHgIx8c

What happened on I’m A Celeb tonight?

Danny was then seen putting his hand over his mouth as Louise Minchin held his arm to comfort him.

She said: “I’m not going to let you be sick Danny.”

Following their helicopter ride, Danny along with Louise, Naughty Boy and Snoochie Shy took on The Plank.

They had to walk along a plank, which was 213 feet above a quarry.

They had to walk along the plank and then press a button with their foot when a light turned green.

Unfortunately for Danny, he lost against Louise and dropped off the plank.

Viewers took to Twitter and are already predicting Danny will face the public vote when it comes to Bushtucker trials.

One person said: “Danny is gonna be picked for every trial possible.”

Another wrote: “Danny Miller is going to be voted for trials isn’t he.”

A third added: “Danny Miller is literally setting himself up to be picked for literally all challenges.”

Another tweeted: “Danny is going to be put forward for all of the eating challenges let’s be honest.”

Are you enjoying I’m A Celebrity so far? Leave us a comment on our Facebook page @EntertainmentDailyFix and let us know.