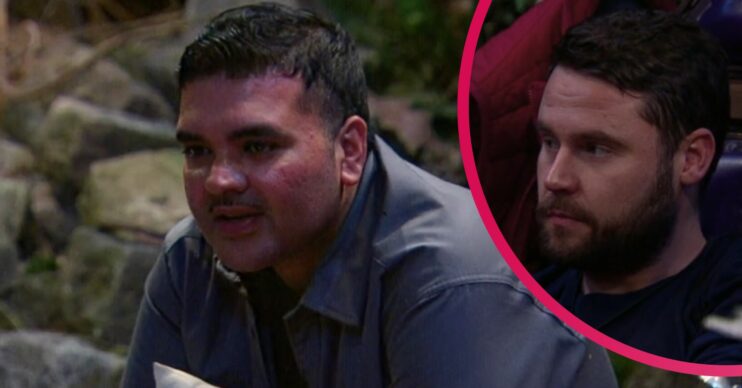 If looks could kill...

Viewers started to turn on Danny last night (Monday, December 6) after the soap actor turned down the opportunity to do a trial, despite saying for days that he wants to do one.

What happened on last night’s I’m A Celebrity?

The celebrities were given the opportunity to pick who they wanted to take part in a challenge last night. Ex-BBC Breakfast presenter Louise Minchin put herself forward as she had yet to do one of the trials. That just left one other celebrity to volunteer.

Eventually, Paralympic gold medallist Kadeena Cox said she’d do it. Louise and Kadeena took part in the Critter-cal Cages trial and managed to bag an impressive 10 stars in a challenge that involved bugs and snakes.

Read more: I’m A Celebrity: Dec Donnelly hits back at viewer over letters from home criticism

However, many I’m A Celebrity fans were surprised that Danny Miller hadn’t volunteered to do the trial. Danny had previously taken issue with the fact that Naughty Boy had done seven trials.

The other day the soap star even told the British public that the situation was “boring”.

What has Danny Miller said previously?

“So boring, night after night. Boring, boring, boring,” the actor seethed the other night as Naughty Boy did another trial.

“You know it would be nice to switch it up and chuck a couple of other people in there but the British public want to see Naughty Boy,” he continued.

But, when it came down to being given the chance to do a trial, Danny said: “Whatever, I’m not desperate to do one.”

As Naughty Boy gave his thoughts on who should do the trial, Danny, 30, could be seen ‘glaring’ at the music producer. Fans of I’m A Celebrity certainly didn’t miss the look the actor gave his fellow campmate.

What did I’m A Celebrity fans say online?

“Danny with those passive-aggressive daggers at Naughty Boy there. He was complaining NB doing so many trials but wasn’t too keen himself,” one viewer wrote.

“Danny with those passive-aggressive daggers at NB [Naughty Boy] constantly. Really starting to go off both him & David [Ginola] tonight unfortunately,” another I’m A Celebrity fan said.

“Is Danny giving the daggers?” another viewer wrote.

Read more: I’m A Celebrity: Kadeena Cox is second star to be voted off

There were some I’m A Celebrity fans who were on Danny’s side though.

“David & Danny are just an absolute mood, on the other hand Naughty Boy’s tache is not,” one viewer said.

Elsewhere in the show, despite her impressive performance in the trial, Kadeena became the second celebrity to be voted out of Gwrych Castle. Many viewers were upset that the athlete had been evicted though, claiming the star had been “robbed” of being Queen of the Castle.

Whose side are you on in the Danny vs Naughty Boy ‘feud’? Head to our Facebook page @EntertainmentDailyFix and let us know!