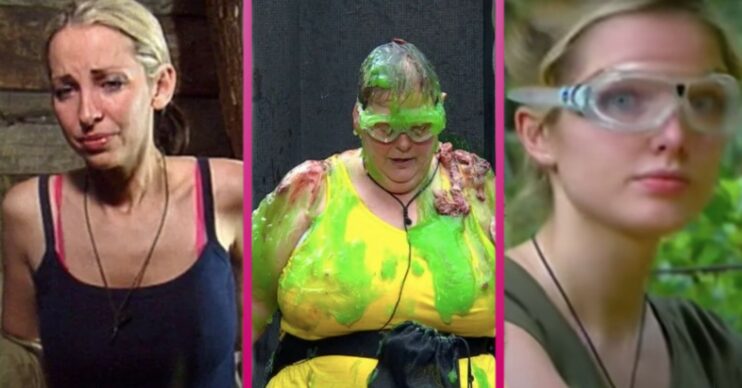 The celebs who screamed those infamous words

I’m A Celebrity has returned and with it comes a new batch of exciting Bushtucker Trials.

So far no one has cracked under pressure and shouted the iconic phrase, “I’m a Celebrity – Get Me Out Of Here!.”

But have there been any celebs in the past who have?

After being nominated for so many Bushtucker Trials already, Natalie Appleton had finally given up in the Slither River trial.

In the trial, Natalie had to release 10 buoys attached to a rope in the freezing cold water filled with snakes and eels.

Natalie was already weak from not eating enough so she only managed to win one star before giving up.

Scott Henshall shocked everyone at home when he quit Jungle Boogie after only winning one star.

In order to win meals for camp, Scott had to wear a pair of plastic trousers and dance to disco songs.

All whilst being showered with critters!

The fashion designer only lasted one track before he bailed on the trial screaming: “I don’t dance and I hate bugs!”

Nutritionist Gillian McKeith became the public’s favourite vote in 2010 and was forced to face a number of horrific trials.

Due to her squeamish nature she couldn’t handle some of them, which meant that she didn’t always bring back as many stars as her campmates hoped.

Read more: I’m A Celebrity contestants who have shown the most star power in their trials

One of the trials she walked away from was the Dreaded Digger, where she was told that creepy crawlies would be dumped on her head.

After bailing on the challenge, she told hosts Ant and Dec: “It’s just too much”.

Gillian also made television history when she fainted on live TV after being told she was voted to do the next trial.

Corrie star Helen Flanagan was prone to freaking out during her challenges.

So naturally everyone wanted to vote for her in the Bushtucker Trials.

However, her campmates weren’t too happy when she stopped bringing back any stars for camp.

In one of the trials Helen was locked in a crate filled with horrible critters and, within just five seconds, she already begged Ant and Dec to let her out.

She also quit the Rodent Run trial before it even started because she claimed that she “couldn’t be bothered any more”.

Socialite Lady Colin Campbell certainly kept us all entertained with her brutal insults.

However, she didn’t always deliver when it came to the Bushtucker Trials.

Read more: The biggest divas to ever appear on I’m A Celebrity

One trial involved her crawling into a tunnel and being buried by lots of creepy crawlies.

But before even entering the pit, she refused to participate.

She explained that she had a cousin who died from being buried alive so the trial would be very “traumatic” for her.

Lady C also refused to do the Scarier 51 trial claiming that she wasn’t going to do any more trials.

Things got too much for Iain Lee when he quit halfway through the Temple of Gloom.

The Bushtucker Trial saw him head down into a tank full of water trying to make his way through the chambers using air pockets to breath.

After several attempts, Iain couldn’t do it any more and decided to bow out.

Iain started to get really emotional knowing that he’d let his campmates down by not winning any meals.

Viewers felt guilty voting for Anne after her break down in the Montrous Monoliths trial.

During the trial Anne had to undo padlocks whilst being covered in slime and fish guts.

Anne tried her best to win as many stars as she could but after only gaining two she broke down in tears and decided to quit.

Anne’s bravery in the jungle inspired so many people at watching at home, including The National Autistic Society who were so proud of how far she came.