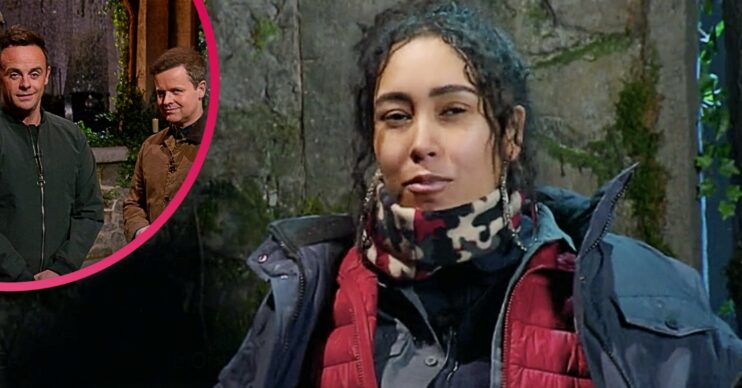 You couldn't fail to spot them

And viewers immediately called foul, asking why these ‘luxury items’ should be allowed into camp.

What did I’m A Celebrity stars Ant and Dec say about Snoochie and her earrings?

“Eagle-eyed viewers will have noticed Snoochie’s earrings… did you see them?” Dec said to camera.

Dec then continued, explaining: “We asked about this, apparently, the rule is… they can bring jewellery in, as long as it’s not expensive or they don’t have any sentimental value.”

“So, if you bought her those earrings… sorry and sorry!” Ant added.

Wtf are those earrings Snoochie, did you sneak them back in….#ImACeleb

So you are not aloud any luxuries in the camp on @imacelebrity however I noticed lastnight @snoochieshy was wearing hoop earrings? Surely that’s a luxury item, I don’t see any other campers wearing earrings 🤔#ImACeleb #ImACelebrity #antanddec

I’m surprised Snoochie is allowed to wear her big hoop earrings, I would’ve thought they be classed as a luxury thing? #ImACeleb

How did viewers react to the earrings?

Upon seeing Snoochie’s earrings, viewers asked if the DJ wearing them was fair.

One fan said on Twitter: “@NaughtyBoyMusic Didn’t get to bring in his brooch yet she gets to bring in fancy earrings?

“How exactly is that fair? Especially given she totally could of just lied, saying they didn’t hold any [sentimental] value. How can they know for sure? #ImACeleb.”

Another asked: “Wtf are those earrings Snoochie, did you sneak them back in….#ImACeleb.”

A third added: “So you are not aloud [sic] any luxuries in the camp on @imacelebrity however I noticed last night @snoochieshy was wearing hoop earrings?

“Surely that’s a luxury item, I don’t see any other campers wearing earrings.”

Finally, a fourth commented: “I’m surprised Snoochie is allowed to wear her big hoop earrings, I would’ve thought they [would] be classed as a luxury thing? #ImACeleb.”

What happened in last night’s trial?

Despite Snoochie’s earrings catching fans’ attention, all eyes were on Frankie Bridge and Naughty Boy as they took on the latest trial.

In Castle Scary-oke, they both had to sing for their supper.

Read more: I’m A Celebrity fans beg for ‘autotune’ as Frankie and Naughty sing for their supper

You’d think that being part of the music industry, they would ace the singing part.

But even Frankie admitted that he wasn’t at her most “tuneful”.

Might have had something to do with being pelted with gunk and having to drink disgusting drinks after each song.