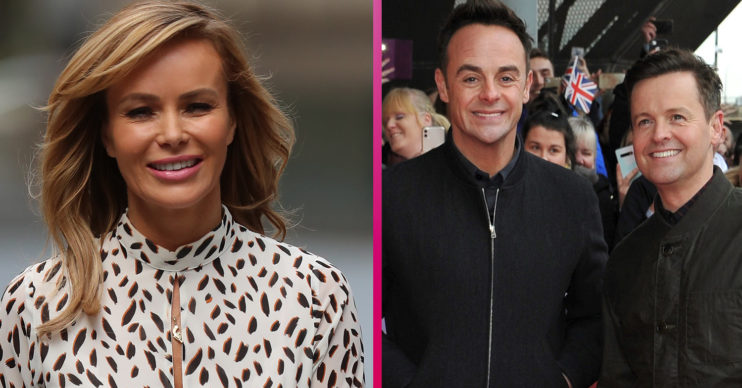 I’m A Celebrity: Amanda Holden fears show is under threat due to coronavirus

The show is due to begin next month

Amanda Holden expressed her worry that I’m A Celebrity is under threat due to the coronavirus pandemic.

The First Minister of Wales Mark Drakeford has proposed a ban on people from COVID-19 hotspots in England from crossing the border.

This could have an impact on the upcoming series of the ITV reality show.

I’m A Celebrity ‘under threat’

The programme has already relocated from its usual Australian jungle camp to Gwrych Castle.

However, the possible restrictions could now stop the contestants and crew from crossing the border in time for filming.

And what will happen to poor Ant and Dec? They’ve been so excited.

During her Heart Breakfast show on Thursday, Amanda said: “I wonder will it go ahead now?

“And what will happen to poor Ant and Dec? They’ve been so excited.

“I can’t imagine anyone turning away Ant and Dec, it would be the first time in their career.”

ITV producers reportedly concerned show will have to cancel

It comes after reports suggested producers are concerned about a ban on filming taking place if PM Boris Johnson enforces stricter rules.

Meanwhile, I’m A Celebrity – which is hosted by Ant McPartlin and Dec Donnelly – reportedly faces being filmed in the UK for the next two years, if the pandemic continues.

An insider recently told The Sun: “As with this year, producers are looking at all possible eventualities.

“There is a very real chance that the show will be in the UK again next year, so they are trying to get their ducks in a row and have a plan B like this time around.

“They have informally spoken to the owners of the castle and asked about its availability over the next two years – so into 2022.”

In addition, ITV bosses reportedly fear lockdown restrictions could lead to the show being cancelled.

Read more: I’m A Celebrity… Get Me Out Of Here! could face the axe this year thanks to COVID-19

A source told The Sunday People newspaper: “The possibility of postponing the series and rescheduling to early next year was given due consideration.”

However, an ITV spokesman previously told The Sun Online: “I’m A Celebrity continues to adhere to all relevant guidelines as well as our own strict Covid protocols.”