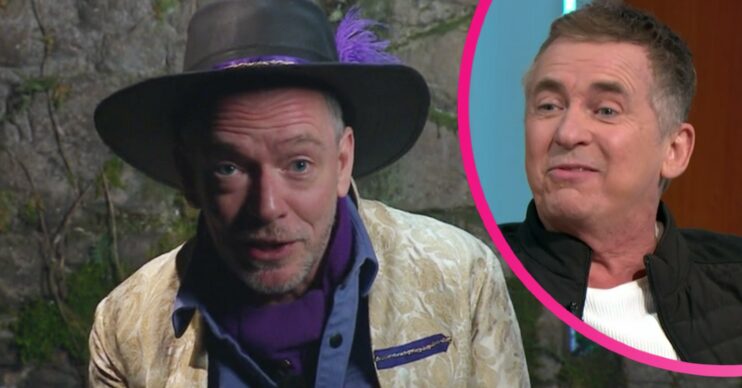 They've been friends for years

I’m A Celebrity star Adam Woodyatt made his debut on the ITV programme last night (November 25).

But what does soap co-star Shane Richie make of Adam‘s show stint?

Shane explained that he had spoken to Adam shortly before he joined the show.

He shared: “A few weeks ago we were chatting and he said to me ‘what’s the shrubbery like?’, I said ‘why what have you got in mind’.

“He said ‘I’m thinking if I gather up as much nettles as I can, I can make a cup of tea’.”

However, Shane admitted that he attempted the same last year and nearly poisoned himself, as they were sprayed with insecticide.

The actor added: “So I had to warn Adam, so he knows not to do that.”

Shane later went on to describe his pal.

He said: “I’ve known Adam the best part of 30 years and he was my mentor when I went into Eastenders – everyone has a mentor.

“I love his sense of humour. Now if you don’t get it, it can be sometimes be dry. He’s very focused – he’s had his own gym, he’s an incredible photographer and his cooking skills are incredible.

“When he gets passionate about something he takes it to the limit 100%. Sometimes it can kinda wear you down a little bit.

“But he can be very funny, he’s a team player and he’ll always have your back. He’s a very honest guy. He’ll do really well.”

Meanwhile, Adam and Simon thrilled viewers as they joined the show last night.

Shortly after being introduced to their fellow campmates, the pair took in their first trial.

They were also made Lords of the Castle, making them exempt from all camp chores.

Fans appeared delighted, with one saying: “Now Steve McDonald and Ian Beale are in the castle, #ImACeleb has officially started.”

A second added: “#ImACeleb love Simon and Adam such great characters. Great addition to the camp.”

Referring to their soap characters, a third wrote: “Ian and Steve are class #ImACeleb.”