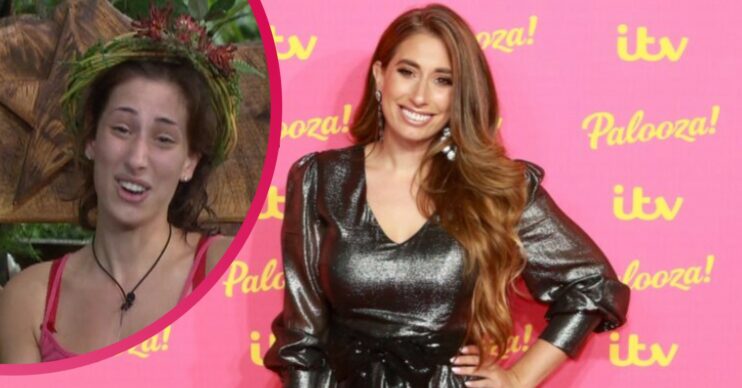 The 2022 I’m A Celebrity spin-off series could see a huge fan favourite return.

Yes, Stacey Solomon is said to be “in talks” to join the new show, The Sun reports.

Former winner of the ITV reality show, Stacey, 32, could return to the jungle – although it won’t be Down Under.

Could Stacey appear on the I’m A Celebrity 2022 spin-off?

A source told the publication: “It’s still really early days. But I’m A Celebrity bosses are keen to bring back the most talked-about stars.

“Stacey and Caitlyn [Jenner] were both great value in their years and reckon they’ll be even better viewing a second time.”

Although nothing is set in stone, X Factor star Stacey was a firm favourite when she won the show back in 2010.

Rumours are understandably rife, but we think it would make sense if she returned to the show with fellow jungle veteran and fiancé Joe Swash.

Joe won the show back in 2018, so the hilarious couple would be a welcome addition for fans.

Stacey and Joe welcomed their daughter Rose to the world six months ago, meaning she might be reluctant to leave the baby so soon – or she might be glad for a break!

What we know so far

News of the spin-off broke this week, with early reports suggesting a complete refresh of the normal format.

According to MailOnline, the show will be filmed in South Africa and will still be hosted by long-time presenters Ant and Dec.

But in a big twist, the spin-off won’t have a public vote.

Instead of running for three weeks, it will run for just two. Could this mean it’s more realistic to expect an appearance from Stacey?

Don’t worry, though, it won’t replace the normal I’m A Celebrity, which should be filmed in Australia this year.

A source told the news outlet: “The team behind I’m A Celebrity are making a brand-new spin-off of the hit series featuring the most loved, favourite campmates from previous years.

“The campmates will be doing trials and living in the camp environment, but with fresh and exciting new twists, and they will have a hand in their own destiny through a series of internal votes and challenges.”

Other celebs rumoured to be considered for the show include Gino D’Campo and Vicky Pattinson.

Who do you want to see on the new spin-off? Tell us on our Facebook page @EntertainmentDailyFix.