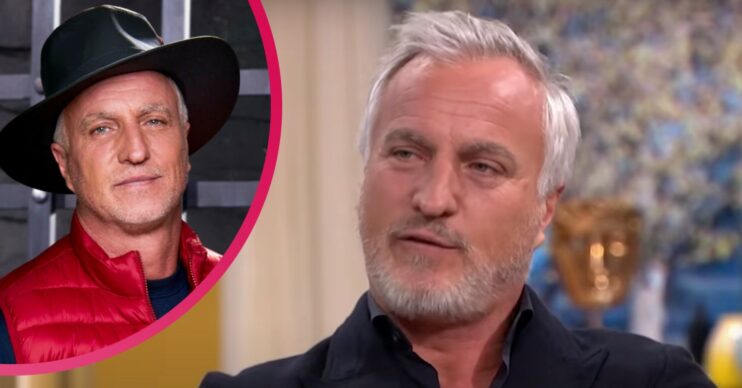 Worries about another - this time fatal - heart attack

Former footballer David Ginola will no doubt bring plenty of Gallic flair to I’m A Celebrity 2021.

The French star terrorised the defences of English teams with his silky ball skills in the 1990s and early 2000s.

But now the 54-year-old is on the I’m A Celebrity 2021 cast line up, will the ex Newcastle United star hit the back of the net and become King of ITV’s Castle?

Who is I’m A Celebrity 2021 cast member David Ginola?

David first made an impression on British life when he signed for the Geordie club in 1995.

He spent two years lighting up St James’ Park as one of the most admired wingers of his generation.

His dazzling dribbling and fiery passion endeared him to the Newcastle faithful and he is an all-time legend at the club.

David later went on to become a darling of the stands at Tottenham, spending three years in London.

Having spent ten seasons playing for French clubs and making 17 appearances for the national team before crossing the Channel, David went on to have further stints at Aston Villa and Everton.

What success did David Ginola enjoy in football?

David enjoyed honours with Paris St Germain, as well as winning the League Cup with Spurs in 1999 and the 2001 Intertoto Cup with Villa.

Nonetheless, despite his influential contributions to games, David was often perceived as a mercurial talent of individual brilliance.

His touch and dribbling were both regarded as magical – and he was recognised with several individual awards.

So expect him to shine and be a team player in Gwrych Castle in north Wales.

What has David Ginola done since retiring from football?

David had already dipped his toe into the world of modelling before he entered English football, strutting his stuff on the catwalk for Cerruti.

But many TV viewers will probably remember how his long locks used to appear in ads for L’Oréal hair products.

David has also acted in numerous films and has made appearances in TV shows such as At Home with the Braithwaites and Coach Trip.

And in 2011 he made it to the final three in the first series of the French version of Strictly.

David continues to be a football pundit for several broadcasters.

What happened when he had a heart attack?

He was also jolted with a defibrillator several times before undergoing a quadruple bypass.

David ‘died’ for nine minutes during the ordeal.

And his surgeon noted that without the CPR, David would likely have suffered brain damage – or may not have survived at all.

Is David Ginola married? Does he have children?

David married model Coraline in 1991 and they share a son (Andrea) and daughter (Carla) together.

They reportedly announced their separation after 25 years just a few months before he suffered his heart attack.

Who is David Ginola’s partner?

Weeks after his medical emergency, David and partner Maëva Denat confirmed their relationship in June 2016. They reportedly met for the first time in a restaurant on the day he ‘died’.

She is also a model, and 22 years younger than David.

They have a three-year-old daughter called Ever together.

Maëva has recently expressed concerns about David’s lifestyle – and has indicated she fears he may not live to see Ever as an adult.

She has claimed he previously scoffed ‘like a viking’, smoked cigarettes and loves wine, red meat and cheese.

Maëva told The Sun: “I am always worried about David’s health and what if something happens like before?

“Smoking is one of the most dangerous things for the heart and there have been times I have taken his cigarettes and thrown them out.

“We have both learned CPR and how to use a defibrillator and we are buying one for our home. They are so important to have at hand if someone suffers a cardiac arrest.”