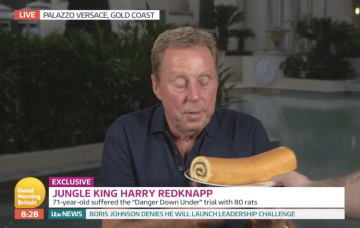 I’m A Celebrity winner Harry Redknapp finally got his hands on his favourite jam roly-poly on today’s Good Morning Britain.

The newly crowned King of the Jungle vowed to open a market stall with his beloved wife Sandra and sell the classic dessert, as he tucked into the pudding.

Harry, 71, said she had been baking them to flog to customers after he was handed a giant cake by a member of the production crew.

GMB host Kate Garraway wasn’t so sure it was quite what he had wanted, though, as she said: “I think that might be a Swiss roll.”

But licking his fingers from the jam as he spoke to Piers Morgan and Kate via a satellite link from Australia, the ex-football manager said: “Me and Sandra are going to open a jam roly-poly stall.

“Sandra’s baking at the moment. She’s baking jam roly poly puddings and we’re going to open a stall selling them on Saturday afternoon.”

The jungle winner replied: “Oh I know. Roll up, roll up, get your roly-polys!”

Viewers shared their delight on social media, along with others who pointed out GMB had given him a Swiss roll, not a jam roly-poly.

Harry had I’m A Celebrity viewers and fellow campmates in hysterics as he spoke of his love for the pud.

But on the show’s final night on Sunday, he admitted making a mistake by instead ordering a sticky toffee pudding to finish off the three finalists’ banquet of choice.

Harry was named the winner ahead of Emily Atack and John Barrowman after being made one of the biggest favourites in the series’ history by bookies.

* Good Morning Britain is on ITV weekdays from 6am.

Should Harry and Sandra set up a jam roly-poly stall? Leave us a comment on our Facebook page @EntertainmentDailyFix and let us know what you think!