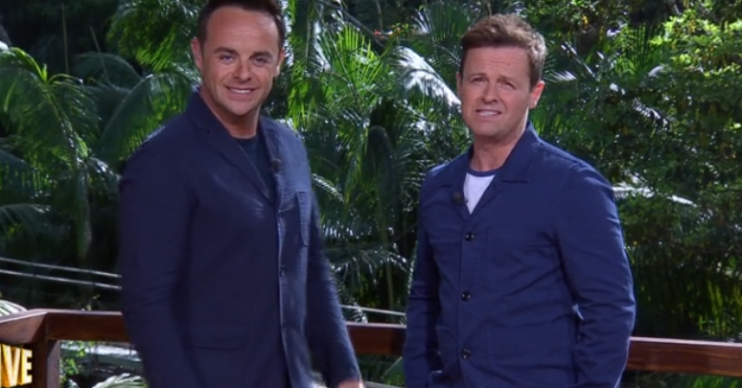 Fans of I’m A Celebrity… Get Me Out Of Here! were stunned last night at the sight of host Dec Donnelly’s “massive” bulge.

The Geordie presenter, 44, had viewers asking what he was “packing” in his trousers during Monday’s (02.12.19) episode, with some wondering if he was smuggling food into the camp via his crotch.

It came after the campmates discussed who they thought was better looking – Dec or his co-host and pal, Ant McPartlin.

Singer Nadine Coyle, who had just done a trial that saw her covered in gunge and caked in mealworms and other creepies as she looked for stars in a filthy mobile home, said: “[Dec] just seems really cheeky, like there’s something cute and cheeky about him.”

Former EastEnders actress Jacqueline Jossa said in the Bush Telegraph afterwards: “Ant and Dec, they’re a bit of alright, actually. I think they’re funny, they smell good. And actually, as they get older, they look even better.

“Don’t know if they’ve had a bit of work done or something, but they are getting better looking and potentially looking younger.”

The programme then cut to Ant and Dec leaning on a railing, looking smug over the likes of Nadine and Jac finding them attractive.

Dec quipped: “What is it about this show tonight? That’s the second time we’ve seen older women lusting after hunky young men.”

Ant said: “There’s more to us two than just our stunning good looks and sculpted bodies, you know?”

I have said it before and I’ll say it again, we’re not just pieces of meat, guys,” Dec joked.

But viewers at home were more focused on Dec’s considerable bulge as he leant against the rail.

One tweeted: “Dec looks like he’s packing quite a bulge tonight… not that I am looking.”

A third wrote: “#ImACeleb is Dec smuggling food into the camp down the front of his trousers? Massive bulge.”

Dec looks like he’s packing quite a bulge tonight…. not that I am looking 😳 #ImACeleb #imacelebrity #IACGMOOH

#ImACeleb is dec smuggling food into the camp down the front of his trousers, massive bulge

Someone else put: “When Dec was leaning then, his bulge looked massive.”

“When Ant and Dec did the posing, I mean Dec those trousers tonight man too tight,” said a fifth, adding: “My mom said, ‘you shouldn’t be looking’ but it was hard not to, even though I prefer Ant and she likes Dec.”

When Dec was leant then his bulge looked massive #ImACeleb

When Ant and Dec did the posing, I mean Dec those trousers tonight man too tight. My mom said 'you shouldn't be looking' but it was hard not to even though I prefer Ant and she likes Dec🤣🤣but great #ImACeleb again tonight.