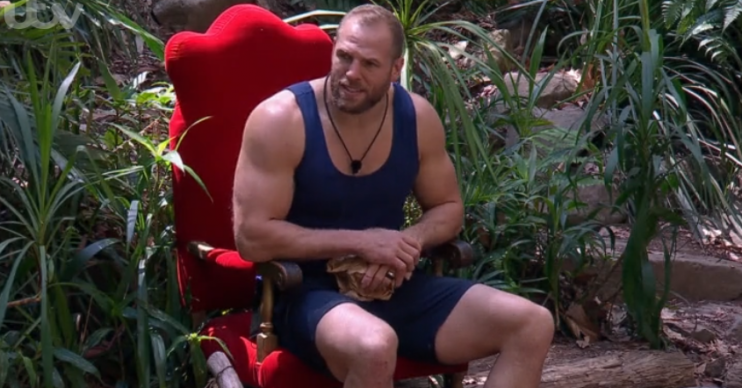 Fans of I’m A Celebrity… Get me Out Of Here! have branded James Haskell a “dictator” and accused him of taking his camp leader role “too seriously”.

On last night’s (25.11.19) episode, James discovered that the camp had a lot more packets of beans left than they originally thought, which meant the celebrities had effectively gone hungry for nothing the day before.

James fumed: “We’ve got to be way better with this food organisation stuff. We’ve got… 21 beans.”

Comedian Andrew Maxwell complained: “That’s madness, we had such a tiny proportion [of beans to rice] yesterday.”

James said: “Yeah, but it’s because they’re not organised properly, because everyone keeps leaving them in the brown bags instead of doing what you’re supposed to do and put them in a box, so you can see what you’ve got.”

“Myles and Nadine,” James said, adding: “But I’m not going to have a go at Myles because he’s doing such a brilliant job, and I’m not having a go at Nadine because she’s lovely. But we’ve got to have a conversation.”

He continued, speaking in the Bush Telegraph: “I designated catering admin to people and I’ve decided I’m now going to take over it myself to make sure that we don’t find we’ve hoarded food.”

Is James a bit controlling?

Viewers on Twitter branded the former rugby ace “controlling” after the exchange, with one writing: “Food admin, ffs. Why is James such a dictator? #ImACeleb.”

Another said: “Absolutely called that James was a passive aggressive dictator when I first saw him! Never been keen and now people are seeing #ImACeleb.”

A third wrote: “Is James a bit controlling? He’s beginning to make me feel a bit uncomfortable. #ImACeleb.”

Someone else tweeted: “James is a massive dictating [bleep]. Taking his temporary role waaaay too far.”

“James is taking this leader job way too seriously,” said a fifth, adding: “‘I’ll have to talk to Catering Admin’.”

A sixth tweeted: “Just me that thinks James is so bloody bossy?”

But others love how James is handling himself in the camp. His wife, TV presenter Richard Madeley‘s daughter Chloe, shared a snap of them goofing around on Instagram.

And in the comments, her followers rushed to tell the fitness fanatic how much they enjoy watching her husband, with one writing, “My heart would be swelling watching how well he’s doing” and another commenting, “Loving James! Such a born leader and motivator”.

Read more: Ant and Dec leave I’m A Celebrity fans confused with photo of them enjoying downtime away from filming

The celebs were treated to a huge roast dinner as a reward for their efforts during the Love Island-themed live trial, but Caitlyn felt sorry for Ian – who, along with Andy Whyment and Cliff Parisi, was left behind at the main camp.

The American reality star smuggled a corn on the cob back into camp and gave it to Ian, leading hosts Ant and Dec to ominously tell viewers the misdemeanour had been “noted”.