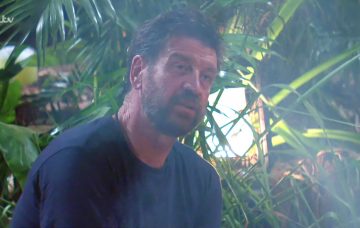 He stripped down to his speedos

Nick Knowles left I’m A Celebrity viewers stunned during last night’s show when he stripped down to his speedos.

The DIY SOS presenter, 56, had offered to help campmate Emily Atack collect some water for the camp when he gave fans an eyeful by taking off his clothes to reveal a pair of tiny red swimming trunks.

But viewers were distracted by the size of Nick’s “big package” as he strolled around camp wearing the pants.

One fan wrote on Twitter: “Nick has got a big package if you know what I mean.”

Nick Knowles is packing a big load in those trunks #ImACeleb

One person tweeted: “Nick Knowles has a big willy and now we’ve all seen it, I can’t watch any DIY at all.”

That looks a heavy package for Nick to carry around #ImACeleb

Meanwhile, later on in the episode, Nick received a letter from his son TJ as the campmates were rewarded with notes from their loved ones after completing a task.

TJ, 24, wrote in the letter: “I wanted to take this opportunity to tell you how very proud I am of you, not only in terms of how you are doing in the camp, but most importantly how proud I am that you’re my dad.

“Just to let you know, you owe Chris Moyles a pint, as despite everything last week him and his radio team managed to get Make You Feel My Love to number one in the iTunes chart!

“Can’t wait to see you and hope the Rice and Beans aren’t getting too tedious.”

Shocked by the revelation that his song had hit number one, Nick said: “If it’s true it’s very, very lovely. It’s very difficult to believe, but if people are doing that, then thank you.”

What did you think of Nick’s speedos? Leave us a comment on our Facebook page @EntertainmentDailyFix and let us know what you think!