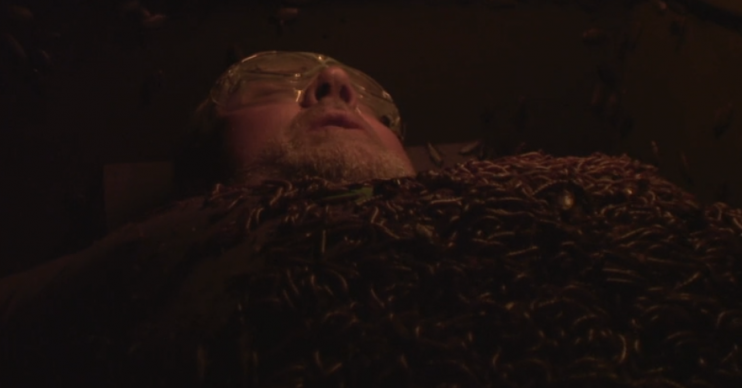 Fans of I’m A Celebrity… Get me Out Of Here! have been dying to see actor Cliff Parisi take on a Bushtucker Trial.

It seemed the Call the Midwife star would never do one of the infamous challenges, as producers continued to rule him out on medical grounds.

But in Thursday’s (28.11.19) episode, Cliff had to do a Reckoning challenge with his campmates – and he didn’t disappoint.

The ex EastEnders favourite competed against his fellow celebs as they attempted to lift the ‘curse’ preventing them from eating proper meals.

Cliff, James Haskell, Adele Roberts and Myles Stephenson were all locked in coffins and covered in creepy crawlies.

As part of the task, they had to wait for a key to be dropped into their coffins and quickly use it to unlock the lid and get out.

They all dealt with the terrors crawling all over them in their own ways – James blowing them off where he could, Adele twitching like mad and Myles covering his ears.

Cliff, on the other hand, decided the best way to lighten the mood would be to sing an X-rated song!

Cliff is a legend.

“There’s a party in my pants, do you wanna come?” he crooned, as he waited for the key to drop.

Viewers on Twitter were in hysterics, as one quoted him and said, with a string of laughing-crying emojis: “Omg Cliff.”

Another tweeted: “How can you not love Cliff? ‘There’s a party in my pants’. I’m done.”

Someone else wrote: “Cliff singing, ‘There’s a party in my pants, do you wanna come?!’ to get over the stress of the trial is just brilliant.”

A fourth laughed: “Cliff is a legend.”

Cliff: There’s a party in my pants do you wanna come? 😭🤣.

It’s so odd not calling him minty 🤔#imacelebrity

"There's a party in my pants, do ya wanna come"

Cliff singing about a party in his pants 😂😂😩😩😩😆 #ImACeleb #imacelebrity #ImACelebrity2019 pic.twitter.com/HNECwZrELl

"Theres a party in my pants, do you wanna come" Cliff is a legend 😂 #ImACeleb

Elsewhere in the episode, fans were fuming to see Kate Garraway’s “stupid” bunches return to the show.

Viewers complained last week when the Good Morning Britain star put her hair up in bunches when she did a Bushtucker Trial with campmate Caitlyn Jenner.

And as she took on a Reckoning trial on Thursday with Andy Whyment, Andrew Maxwell and Caitlyn, viewers struggled to get past her bunches and demanded she stop wearing them.