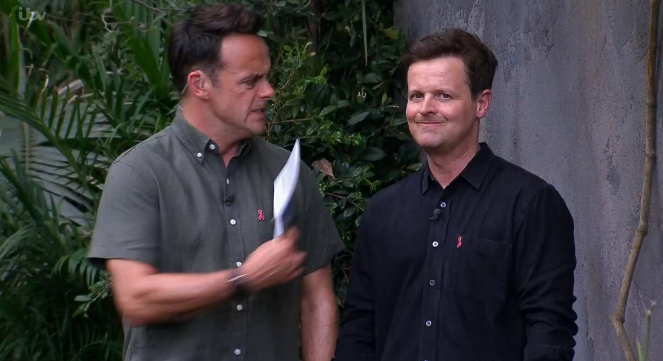 A bit TOO much beige?

Each night on I’m A Celebrity… Get Me Out Of Here! hosts Ant and Dec don their jackets and bring us all the news from the jungle.

But fans have been left divided over Dec’s latest ensemble, with some unsure about it, and others loving it!

On Sunday night’s show (December 1), Dec wore an all beige number – from the shoes all the way up to his double-breasted jacket.

Despite Dec looking dapper in his smart attire, viewers at home started comparing him to all sorts – a bush ranger, a hunter, sandpaper (!) and even Kiosk Kev!

Has Dec dressed up as sandpaper for this evening’s show?🤔 #imaceleb #imacelebrity

However, not everyone jumped on the teasing bandwagon.

Some were big fans of the outfit – the coat in particular.

Dec absolutely love your jacket!! Where’s it from? @antanddec #ImACeleb 👕😁

The second vote off saw Andrew Maxwell leave the jungle.

Viewers at home were stunned after predicting either Ian Wright or James Haskell would go home.

The sportsmen had been immune from the first vote off, which left the public annoyed, but they took to social media to insist they’d be sending them home at the earlier opportunity.

When Ian took part in the trial earlier in the evening, it seemed he’d sealed his own fate.

Viewers called him ‘moody’ and a ‘brat’ telling him to ‘grow up’ after he kicked off when he was voted to do the trial.

Even ally James commented that Ian’s mood was affecting everybody else in camp.

One tweeted: “Ian’s moody, snappy behaviour over doing a trial is [bleeping] me right off.

“Cheer up man, I know you’re tired and hungry and don’t like trails but dude you weren’t forced into this show! Half the British public would pay to be in your place right now.

Ok Ian, go back to sleep, and starve! #ImACeleb pic.twitter.com/BNdT6BIXkV

get Ian Wright out he’s so moody and annoying 🥱 #ImACeleb

can we please get rid of Ian, thank you. #imaceleb

Ian competed in the trial that saw him taken in an elevator (that didn’t appear to be moving!) to different rooms filled with critters and nasties.

He had to untie a series of knots on ropes to reach the stars and complained that the knots were far far too tight.

He managed to secure seven stars for the camp dinner, but having set himself a target of eight, he was furious at ‘failing’ and punched a wall.