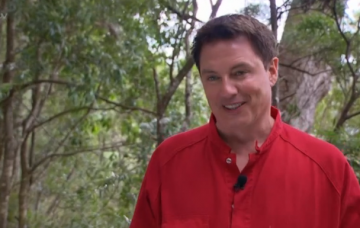 We've not even met the full line-up yet!

We’ve only just been introduced to our line up of stars for this year’s I’m A Celebrity… Get Me Out of Here! and fans are already calling who they want to win: John Barrowman.

The Torchwood star was a surprise addition to the I’m A Celeb line up, but we’ve even seen all the celebs on screen, fans are already flocking to Twitter to insist they want him to win.

Read more: I’m A Celebrity star has been ‘starving’ themselves in preparation

John was the first to arrive at a luxury location and started on the cocktails before he was joined by ex-EastEnders actress Rita Simons, Corrie star Sair Khan and The Vamps singer James McVey.

Presenters Holly Willoughby and Declan Donnelly then arrived to tell them they were being split into two teams and had to complete a terrifying challenge to be able to pick their other campmates and win the best camp.

Before he even undertook the challenge, fans were saying just how much they love him and how they want him to be their winner.

Already got my winner @JohnBarrowman #ImACeleb come on John 🙂

OMG!! I bloody loved @JohnBarrowman before but just doing his intro i LOOOOOVE him more, as if it were possible, gotta be king/queen (his words) of the jungle this year @imacelebrity #ImACeleb #imacelebrity

Barrowman is annoying as hell. Should make for great TV! #ImACeleb

Barrowman is a joy. #imaceleb

John Barrowman has me in tears, honestly already a winner😂😂 #ImACeleb

And something else fans noticed about him was that he’s not even got into the jungle yet and he’s already sunburnt!

John is so red and shiny…😆😂#ImACeleb

The Barrowman love is pretty strong, but there were at least some calls for other winners.

Anne Hegerty for Queen of the Jungle #ImACeleb

It’s pretty early to be calling the winner – could the series really already be wrapped up before it’s even begun?

Is John Barrowman your winner? Leave us a comment on our Facebook page @EntertainmentDailyFix and let us know what you think.