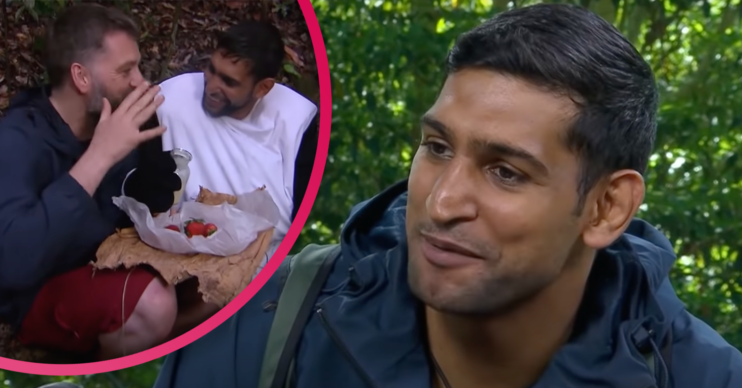 Lock up your strawberries!

I’m A Celeb All Stars is coming to ITV next year and retired boxer Amir Khan has revealed that he has signed up to take part.

The series is expected to air in 2023 and will be filmed in South Africa’s Kruger National Park.

This is where the Australian version of the show is filmed.

This time around, the celebrities – who’ve all appeared on the show before – will have a say in who does the trials thanks to in-camp voting.

I’m A Celeb All Stars: Amir Khan first to sign up

Amir first appeared on I’m A Celebrity back in 2017 when he headed to the Aussie jungle.

During his series, Amir squealed like a baby over every single creepy crawlie that came his way.

He also caused a stir when he and Iain Lee secretly ate strawberries and cream behind the backs of their fellow campmates.

And now he’s going back to do it all again – and it seems he can’t wait!

‘One of the best things I ever did’

He told The Sun: “I think it’ll be brilliant. I think people get to see another side of me and it would be nice to do something like that. Now that I’ve got time I can do it. Before I couldn’t.”

I think people get to see another side of me and it would be nice to do something like that.

Amir was injured the last time he took part in the show, so thought he may as well give it a shot seeing as he was unable to get into the ring.

“I enjoyed it. It’s one of the best things I ever did. Going in the jungle, being away from everyone, being focused, focusing on you and what you want to do in life. I didn’t have other voices telling me what to do. I was thinking for myself and I loved it, honestly,” he continued.

Amir added: “The team I had around me was amazing, everyone was great and it was one of the best experiences I’ve ever had – apart from seeing spiders and snakes and [bleep]!”

Who else is going in?

Katie Price has reportedly been banned over fears she’s too much of a liability to take part.

Paul Burrell and Gillian McKeith are among the stars who are also in the process of signing up.

Stacey Solomon is another all star on the top of ITV’s list.

She is said to be “in talks” to take part.

Helen Flanagan is also “considering taking the leap” and signing up for I’m A Celeb All Stars.