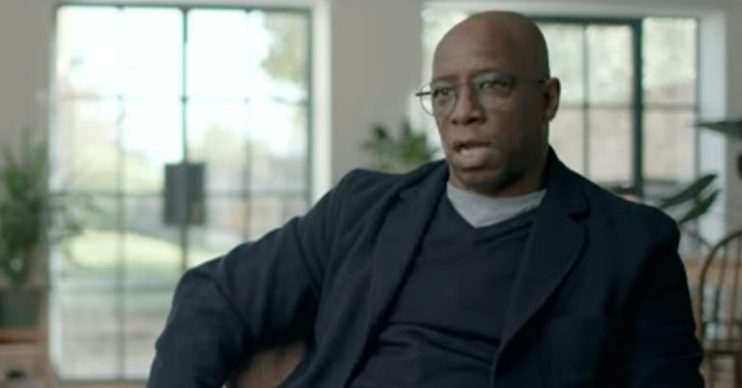 Ian Wright has opened up about years of painful childhood memories in a new documentary Ian Wright: Home Truths.

The former goal scorer speaks out in Ian Wright: Home Truths, which will air this week on BBC One.

The documentary sees Ian revisit his childhood family home in Brockley, South East London. However, the journey isn’t easy and brings up some strong emotions.

The former Arsenal striker lived in fear while growing up in an unhappy home surrounded by violence from his stepfather.

In one clip, Ian is forced to face one harrowing memory as he returns to the family home for the first time since 1973. He lived in one room with his mother Nesta, brother Morris and his stepfather.

He remembers his stepfather’s cruelty as he forced football-loving Ian to face away from Match of The Day when it aired on their TV.

Ian said: “Back then when my stepdad came home he’d make me turn away and face the wallpaper when it was on just because he could.

“When you had to turn round from the TV I remember being close to the wall. It was just so unnecessary, just cruel. ”

Another difficult memory for Ian is when he remembers the violence he was witness to in the home. His stepfather could often be violent, particularly to Ian’s mother Nesta.

Reflecting on the memory, Ian opens up: “You know you’re going to see or hear something horrible. There was one time her eye was cut. She said he punched her.

“I remember he grabbed my mum’s neck and it made me feel so helpless to see her so helpless and she was trying to say sorry when he had his hand round her throat.

“Even when I went to bed I just could not get rid of the memory of how helpless she was.”

Additionally, Ian remembers how elder brother Morris tried to protect him when the violence was happening. He said: “We were both crying, that’s when Morris would try and cover my ears. All I remember is being afraid to turn around.”