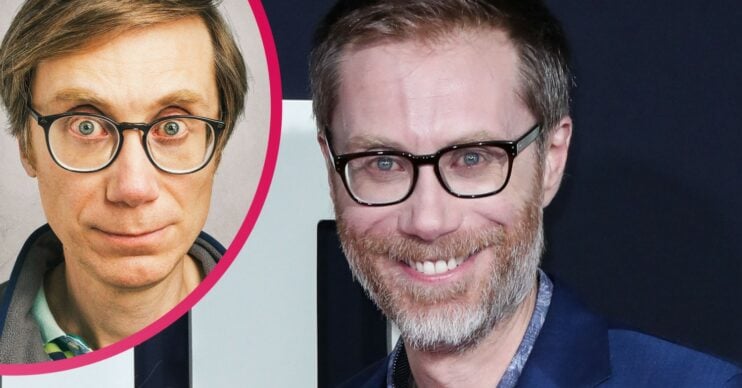 How tall is Stephen Merchant? Is he married and why doesn’t he work with Ricky Gervais anymore?

Stephen and Ricky made The Office, Extras and Life's Too Short together...

Stephen Merchant made his name behind the scenes working on hit comedies including The Office and Extras alongside Ricky Gervais – but how tall is he and are the pair still friends?

The producer and actor is now just as famous for his roles on screen as off.

But his latest role couldn’t be more different to the comedy he’s known for.

Here’s everything you need to know about Stephen Merchant.

Read more: The Outlaws on BBC One: How many episodes are there in Stephen Merchant comedy drama and where was it filmed?

Who is Stephen Merchant and what is he famous for?

Stephen is best known for being a comedian, writer, director and actor.

He co-wrote and starred in the iconic TV series The Office alongside Ricky Gervais, as well as Extras and Life’s Too Short.

Stephen portrayed Nathan ‘Oggy’ aka The Oggmonster in The Office.

He went on to co-host The Ricky Gervais Show on radio with Ricky and collaborator Karl Pilkington.

The show spawned a podcast and audiobook.

The Outlaws star also wrote and starred in the film and subsequent HBO series Hello Ladies from 2013 to 2014, which was based on his stand-up material.

Other roles include Mr. Phillips in Bromwell High, Dave Gibbs in The Big Bang Theory, Higgins in Modern Family, mutant Caliban in Logan, and Deertz in the award-winning film Jojo Rabbit.

He currently plays Greg in The Outlaws, a series he wrote and created.

Stephen will play against type in the upcoming crime drama Four Lives.

He portrays serial killer Stephen Port in the drama, which also stars Sheridan Smith as Sarah Sak, the mother of Anthony Walgate, one of Port’s victims.

How old is Stephen Merchant and where is he from?

Stephen James Merchant was born on November 24 1974 in Hanham, Bristol.

As a student, he attended the University of Warwick and graduated with a degree in film and literature.

Read more: The Outlaws on BBC One: Who’s in the cast of Stephen Merchant comedy drama?

How tall is Stephen Merchant?

He has previously revealed that his height made him self-conscious when he was younger.

In fact, Stephen admits he was inspired to get into comedy by Fawlty Towers star John Cleese – who is six feet four inches (193 cm).

Stephen Merchant is not married, but has a long term partner.

He lives with his girlfriend Mircea Monroe, who is an American actress.

The pair were first romantically linked in 2017, and have been together ever since.

They live together in Los Angeles, in a home previously owned by Ellen DeGeneres.

Is Stephen still friends with Ricky Gervais or did they fall out?

Stephen Merchant and Ricky Gervais have not worked together since 2013.

They first met in 1997 while working at London radio station XFM before going on to make The Office, Extras and Life’s Too Short together.

Some reports say that they parted ways as a result of creative differences.

However, Ricky recently revealed they are still friends.

He said: “I haven’t [fallen out with Stephen Merchant and Karl Pilkington].

“I’ve always been doing my own thing, and now they are as well. It’s not a divorce thing.”

Stephen Merchant said in 2018 about another collaboration with Ricky: “If the right idea was there, it’d be good to do something.

“But at the moment, there’s nothing on the horizon.”

Stephen Merchant’s The Outlaws is currently airing on Mondays at 9pm on BBC One, with previous episodes available to watch on BBC iPlayer.