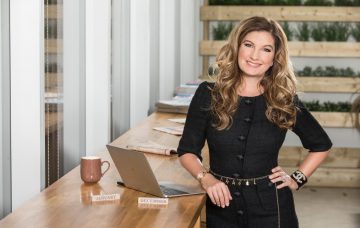 How much?! Viewers in hysterics as Give It A Year inventor puts £1,000 price tag on a MUG!

An inventor on new ITV show Give It A Year has left viewers crying with laughter after trying to sell his range of mugs for £1,000 each.

Thomas Gostelow “gambled everything” spending a fortune developing the product with the goal of solving a very British problem — keeping a cup of tea warm.

But viewers were in hysterics after Thomas, who said his invention was “the Rolex of mugs” and would “go down in history”, failed spectacularly to reach his target of selling 50,000 in 12 months.

In fact, he’s selling just ONE a day on his website.

He featured on last night’s first episode of the new series, fronted by The Apprentice star and businesswoman Karren Brady, which follows budding entrepreneurs before and after the first year of their start-up firms.

And for Thomas, a disaster was brewing from the start when he faced a huge delay to get his initial cheaper design,which started out with a price tag of £70 but rocketed to £129 because of unforeseen, soaring costs, into production.

The devices have a tiny heater that wirelessly recharges its batteries through smart-phone power cables.

After learning that he had made only 500 of the lower-priced mugs after a whole year because he was spending all his time developing the super deluxe £1,000 version, Karren begged him to ditch the idea.

Read more: Viewers appalled by opinions of “sexist caveman” who BLAMES women for not having equal pay with men

Thomas, who part-funded his project through online poker winnings, told her 12 months earlier: “I’ve always dreamed of being the Wallace and Gromit, the inventor.

“You have one life. This is my passion. This is my destiny. It’s a high-quality item. It’s the Rolex of all mugs.

“Once you have a few drinks out of this, everyone will want one.”

This ‘mug guy’ is deluded #giveitayear NO-ONE is going to pay £1000 for a mug to keep their tea hot!

@karren_brady: “who’s gonna pay a thousand pounds for a mug?” You’d have to be a mug to buy one!! #giveitayear

The mug man is in huge denial #giveitayear

Thomas admitted: “If this doesn’t work out, I’ve got to find a way to pay my mortgage. I could lose my house, I’ve racked up close to six figures of personal debt alone.

“If I have to get a job now, I would struggle for the rest of my life just to pay off the debt I’ve incurred to do this.”

Despite hitting none of his targets and receiving some home truths from Karren, Thomas remained defiant one year later, brushing off suggestions that no one would buy his mugs because of the price.

“I’m sure when Enzo Ferrari designed his first supercar, people laughed at him for the price point.

“There are a lot of people out there that wear Rolex watches, that write with Montblanc pens.

“People want to drink out of the best mug in the world. What I’ve created will go down in history.”

Karren told him: “Thomas, stop. There’s a really fine line between enthusiasm and delusion and I think you’re crossing it.”

An on-screen caption at the end of the episode said: “Thomas’s mug now costs £129. He’s selling one a day from his website.”

Would you spend £1,000 on a mug? Leave us a comment on our Facebook page @EntertainmentDailyFix and let us know what you think!