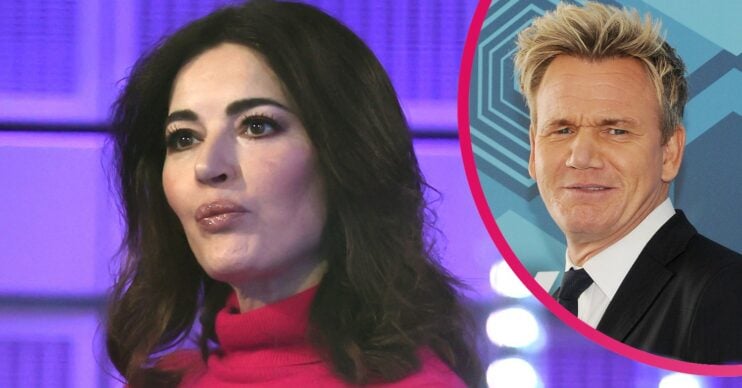 How much is Nigella Lawson worth? How does her net worth compare to Gordon Ramsay?

She's rolling in it!

Nigella Lawson is back on our screens tonight with Nigellissima – but what is the chef’s net worth?

Nigella, 61, is from a wealthy family and has been on the telly for years now.

A bestselling author, she was also married to an extremely wealthy man.

So just how much is Nigella worth? And how do her millions compare to that of the likes of Gordon Ramsay?

We take a look at Nigella’s estimated net worth and how it stacks up compared to other famous chefs.

Nigella Lawson net worth: How rich is the TV chef?

The chef is estimated to be worth around £14 million according to Celebritynetworth.

She has a highly successful media career that stems back decades.

She is also from a wealthy family. Her father is a lord and was the former Chancellor of the Exchequer.

Her mother, meanwhile, is heiress to the J Lyons & Co food company.

How did Nigella kickstart her career?

Nigella attended Oxford University and, upon graduation, established herself as a food and restaurant critic.

The deputy literary editor of The Sunday Times at one point, she went on to write for various prestigious newspapers and magazines.

In 1998 she published her first book, How To Eat. And it was in 1999 that her first-ever television series launched – Nigella Bites.

The posh chef and writer became famous for her sensual presenting style and apparent innuendos.

In fact, she went on to publish various books and star in numerous television series.

To date, one of her most successful books is her bestselling cookery book How to be a Domestic Goddess.

Her success has also spawned a major cookery line – Living Kitchen – and as of 2021 she has sold over eight million books.

Who was Nigella Lawson married to?

Nigella was married to journalist John Diamond from 1985 until his death from throat cancer in 2001.

In 2003 she married art dealer Charles Saatchi but they were divorced by 2013.

They didn’t have children and Nigella has claimed he was emotionally abusive towards her.

Pictures even emerged of him holding her by the neck while at a famous seafood restaurant in London.

He appears to have moved on with former What Not to Wear star Trinny Woodall.

It is unclear if she is currently in a relationship.

How does Gordon Ramsay’s net worth compare to that of Nigella Lawson?

While Nigella may be worth well over £10m – this is just a drop in the ocean compared to Gordon’s net worth.

Despite some of his restaurants closing down in recent years, he is still worth tens of millions.

In fact, according to Celebritynetworth, Gordon is worth around £155m.

How much is Mary Berry worth?

She is said to be worth around £17 million, according to Celebritynetworth.

Nigellissima is on BBC Two tonight (June 15) at 7pm.