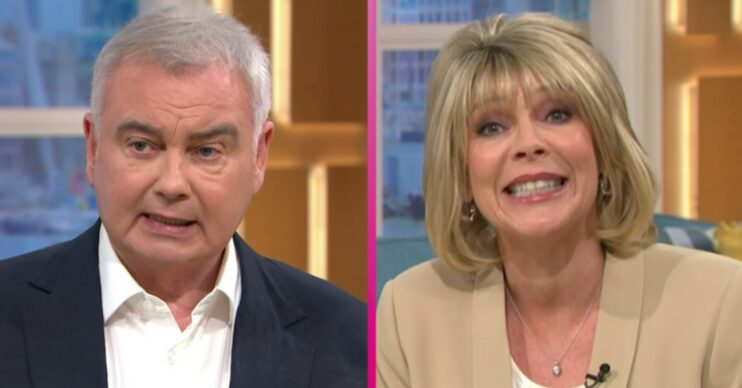 How long are Eamonn Holmes and Ruth Langsford hosting This Morning?

The married pair returned this week!

Eamonn Holmes and Ruth Langsford are back on This Morning – but how long are the married pair hosting the show?

The duo were previously replaced by Alison Hammond and Dermot O’Leary earlier this year.

However, Ruth and Eamonn are back for the summer.

How long are Eamonn Holmes and Ruth Langsford hosting the show?

Ruth and Eamonn took over from Holly Willoughby and Phillip Schofield this week.

The regularly hosts waved goodbye to the studio last Friday ahead of the break.

Meanwhile, Ruth previously revealed she and Eamonn were on the show for seven weeks.

Speaking of their return, she told OK! Magazine: “We’ll be doing seven weeks from July. I’m looking forward to it.”

Earlier this month, he announced: “We’re back on the sofa for @thismorning.

“Join us every weekday morning for the next 7 weeks! Make the most of us while we’re there.”

This means Ruth and Eamonn’s final episode will likely be August 27.

This Morning viewers delighted as the duo return

Meanwhile, viewers were thrilled to see the married couple back on screens on Monday.

Ruth and Eamonn returned to the studio yesterday (July 12).

During the show, one tweeted: “Great to see Eamonn and Ruth back, love ’em!!”

A second said: “So pleased to see Ruth and Eamonn back where they belong at last! Can enjoy watching again!”

Another exclaimed: “Looking forward to the summer holidays now Eamonn and Ruth back.”

A fourth shared: “I’m so glad Eamonn and Ruth are back. How I missed their bickering #ThisMorning.”

Ruth and Eamonn were axed from their usual Friday slot earlier this year.

Instead, they’ve been replaced by Alison and Dermot.

The new presenters have received a mixed reaction, with some fans saying they prefer Eamonn and Ruth.