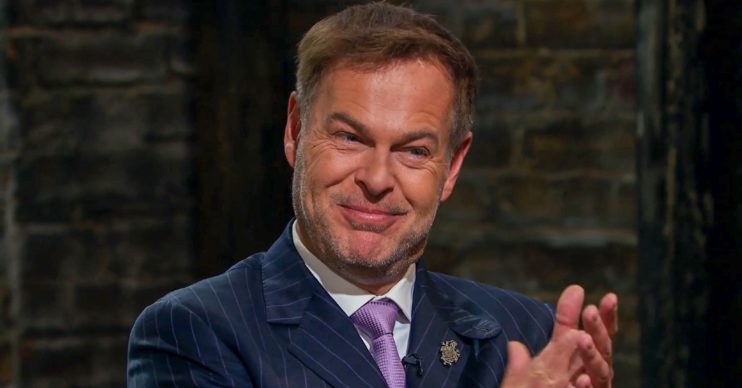 Dragons’ Den is currently running its 18th series, and this time it’s on BBC One,  but Peter Jones is missing – where is he?

The original Dragon has been absent the past couple of weeks – here’s why. We also take a look at his wife and their erstwhile friendship with Holly Willoughby.

Who is Peter Jones?

Peter Jones CBE is a British entrepreneur and businessman.

He has interests in mobile phones, television, media, leisure, retail and property.

After making his millions, he moved over into TV and became a reality television personality on Dragons’ Den in 2005.

He was appointed Commander of the Order of the British Empire (CBE) in the 2009 New Year Honours.

How did Peter Jones make his money?

Peter set up his own business when he was just 16 years old.

He set up a tennis academy and had bought his own house by the time he left school.

He made personal computers under his own brand, but lost £200,000 after deciding to sell it to IBM.

In his twenties, he lost a lot of money when one of his creditors went bust and was forced to give up his three-bedroom home in Bray and his cars, and moved back in with his parents.

Peter then joined Siemens Nixdorf, until their acquisition, when he set up his next venture, Phones International Group, in April 1998.

In his mid-twenties, he opened a cocktail bar in Windsor based on the Tom Cruise film Cocktail.

In the summer of 2005, Peter Jones and Theo Paphitis – a former panellist on Dragons’ Den, bought gift experience company Red Letter Days from another fellow panellist Rachel Elnaugh after it collapsed.

According to his website, some of his investments in businesses that have appeared on Dragons’ Den include luxury lifestyle and culture Wonderland Magazine, Square Mile International, contemporary circus company The Generating Company, Concentrate Design, which makes products claimed to help pupils concentrate at school, Synthetic Genomics, iTeddy and Reggae Reggae Sauce.

In 2013, Jones became the owner and chief executive of Jessops in the UK.

He turned it from a high street camera chain into an online photographic hub.

His telecoms group, Brandpath, is valued at £250 million.

How rich is Peter Jones? How much is he worth?

According to the Sunday Times Rich List in 2020, Peter Jones was worth an estimated £450million.

That’s a £40million decrease from the previous year.

Still looks pretty tasty to us, though!

How old is Peter Jones?

Peter David Jones was born on March 18 1966, the son of a receptionist and an air conditioning salesman.

He is currently 55 years old.

Peter grew up in Langley, Berkshire, before moving to Maidenhead when he was seven.

He attended Desborough School and, subsequently, The Windsor Boys’ School.

He is of English and Russian descent.

Is Peter married and does he have kids?

During their marriage, they had two children together – Annabelle and William – who are now grown up.

He now lives in Buckinghamshire with his long-term partner, Tara Capp, the co-founder of lifestyle brand Truly alongside Peter.

They have three daughters together, Natalia, Isabella and Tallulah.

Peter has previously said that he won’t be passing on his fortune to his children.

He said: “My kids aren’t getting my money. They don’t need it.”

Where is Peter Jones tonight?

Peter told his Instagram followers his absence is down to Covid, explaining: “Since Dragons’ Den began 16 years ago I haven’t missed a single day’s filming.

“However when we were filming the last series I had to self-isolate.

When discussing with the BBC who could stand in for me I chose Theo as in my opinion he remains one of the great past Dragons.

The pair set up the company with mum-of-three Holly Willoughby – their mutual friend of 10 years who they used to holiday with.

However, she walked away from the project a week before the launch, blaming her busy schedule.

At the time, Holly said: “Something had to give. We talked for a long time and it was obvious to all of us that I couldn’t fit it into my life.”

Tara Capp told The Times: “We spent an intense 18 months developing the business and Holly decided she wouldn’t be able to commit the time.

“We fully supported her decision to do what was right for her and her family.”

Peter, who also owns a 40 per cent stake in Holly’s husband’s TV production company, was “furious” according to The Sun.

In a more recent interview with The Telegraph, Tara appears to confirm Holly’s departure from the £11million venture ruptured their friendship.

When asked about the friendship now, Tara says: “Euggh. I’m not going to pretend. It was devastating. We were exceptionally close. And of course as a business, you really feel the loss of a celebrity face.”

How tall is Peter Jones?

That’s 201 cm, and leaves him towering above his fellow Dragons’ Den stars!

In this first episode, a pair of tea entrepreneurs find themselves in hot water when their numbers are interrogated.

The Dragons discover hidden artistic talents when a mindfulness art business is pitched.

And an optical inventor hopes to have investment in sight with his anti-glare eyewear.

Meanwhile, a husband-and-wife team have the needs of NHS workers at the heart of their skin-care business.

*This article was first published on April 1, 2021. It was updated on June 3 to explain Peter Jones’ absence from that evening’s episode of Dragons’ Den.