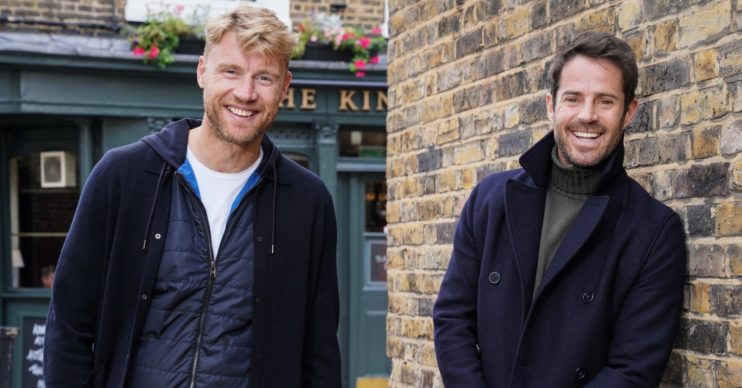 How are Jamie Redknapp and Freddie Flintoff friends and when did they meet?

DNA Journey returns with a second series on ITV1 and the first episode pairs sporting personalities Freddie Flintoff and Jamie Redknapp – but how are they friends?

When did they meet? What’s the connection?

Here’s everything you need to know about their relationship and their appearance on DNA Journey.

How do Freddie Flintoff and Jamie Redknapp know each other?

Freddie and Jamie previously paired up on A League of their Own on Sky One.

Freddie and Jamie have hit the road together in the past for A League of Their Own spin-offs.

A League of Their Own: UK Road Trip saw the former Liverpool and Tottenham footballer travel across the UK with one-time England cricket captain Freddie.

Talking about the show, Jamie has said: “We love it, we’re all best mates and that’s why A League of Their Own works.

“I think in TV shows that work, you can’t force chemistry or make people look like they like each other when they don’t.

“It’s a genuine friendship with Freddie.”

Freddie and Jamie: What’s the connection?

As well as their team captaining on A League of Their Own, the pair have much in common.

Jamie, 47, was at the top of his game as a footballer.

He played for Liverpool, Tottenham and England, before becoming a pundit.

Freddie, meanwhile, was an integral cricketeer for England.

The 43-year-old is married to Rachael Wools and has four children.

Read more: Will Louise and Jamie Redknapp get back together? Star admits regret over split

Jamie and Freddie discover their ancestral roots – and meet family they didn’t know existed – in the new series of DNA Journey.

The sporting legends travel both north and south of the UK as they learn about their genealogical history.

Best mates on and off screen, their jokey rivalry about their ancestors add to the show.

Proud Lancastrian Freddie is anxious that his DNA may lead him to Yorkshire.

Later, Jamie’s family journey takes him to London’s East End, where he uncovers a notorious mystery that has remained unsolved for generations.

Who else takes part in DNA Journey?

In 2019, Ant and Dec explored their family trees in the two-part documentary Ant & Dec’s DNA Journey.

This is the second series of DNA Journey and features three new pairs of celebs.

Father-and-son duo Martin and Roman Kemp also set off on a road trip to find out the secrets contained in their individual DNA.