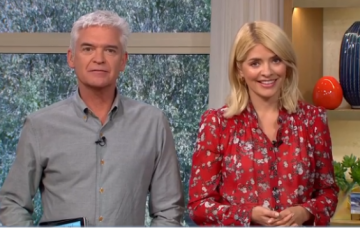 She needed advice on pet grooming.

It was take your cat to work day on Tuesday for Holly Willoughby!

The This Morning presenter brought her cute moggy, Bluebell, onto the ITV show for a segment on pet grooming.

The 37-year-old admitted her cat needed some expert attention after she’d given her a “questionable haircut” herself.

“The team decided to give Holly a grooming lesson so she can’t embarrass the poor cat again,” her co-host Phillip Schofield said.

Explaining her actions, Holly said: “Under her chin here she has really maney fur and when she was licking it, it was getting stuck in her teeth, so I thought, right, I can help you with that, Bluebell.

“I just snipped it but it looked very straight and jagged. I had never heard of taking a cat to be trimmed.”

Julia Harris told Holly you don’t need to use scissors to trim a cat’s fur as you can simply pluck the dead hair out.

However, she did then have to use some scissors to correct the marks Holly had left with her at-home haircut, using a comb to smooth the fur to be trimmed.

“Is she alright with that?” Holly asked,as Julia held Bluebell’s head and moved the comb and scissors over her mane.

“Little weirdo, why does she like that?!” Holly replied.

Julia said she was blending in the fur to make it look “less like it’s been done with a knife and fork” following Holly’s attempt!

Holly also had Bluebell join her on her daily fashion update on Instagram.

Sharing a picture of her outfit, as she usually does with her followers, she held Bluebell in her arms and wrote: “Morning… Bluebell is starring on @thismorning today… she’s having a little trim!”

Her fans commented to say how much they loved her pet.

“Bluebell is so cute!,” wrote one.

“Such a beautiful cat,” wrote a third, while a fourth agreed saying, “Aww lovely cat.”

Holly promised not to give Bluebell a bad haircut again as the cat then had to be whisked out of the studio as some dogs came in for a dog grooming segment.

Have you even given your pet a bad haircut like Holly? Leave us a comment on our Facebook page @EntertainmentDailyFix and let us know what you think!