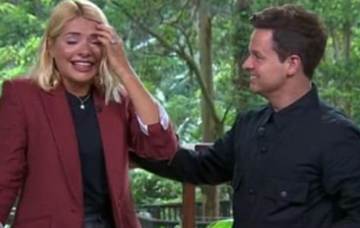 She 'fessed up to This Morning co-host Phil Schofield

Holly Willoughby has said hosting I’m A Celebrity… Get Me Out Of Here! has been like “nothing I’ve ever done before”.

The TV star presented the show with Declan Donnelly while Ant McPartlin is on a hiatus from his regular gigs following his arrest for drink-driving.

Appearing via Skype on ITV’s This Morning in a break from the series wrap party, she said: “Everything about it is completely bonkers, the jungle itself is beautiful, the studio is beautiful.

“But apart from that everything else is mad, everything wants to bite you but I’ve loved it, I’ve really really loved it.”

The TV star appeared on the daytime show giggling and brandishing a margarita, saying: “I am out on the street, I look like I’ve fallen out with my boyfriend!” adding the party had given her the first chance to stay up past her usual bed time.

She said: “Put it this way, I’ve never been up this late. I’ve never seen nighttime in Australia, I go to bed at 5.30pm in the evening and then I wake up at about 10am and then we go to the studio and then we start our day and go live to you at about 6/7am our time so there is no nighttime.”

Speaking about winner Harry Redknapp, she said: “Harry makes your heart melt, that man has had me in tears all the way through it, I have just wanted to hug him the whole time.

“He’s been incredible, he’s just got a kind heart.”

Willoughby added that her children Harry, Belle and Chester have enjoyed their stay in Australia, saying: “They loved it, it’s been mad for them as well. I think Harry being the oldest now he’s probably started to watch it for the first time so to go in there and see it…

“When I come back I’ve got more pictures of them walking into the dunny, Belle actually sat on the loo, she was the bravest of all of them.

Read more: Viewing figures are in for I’m A Celebrity finale

“But they loved it, just being here and being down on the beach, it’s been a one-off bit of heaven.”

However, she said the Bushtucker trials and her proximity to insects was “horrendous, it has been horrific”.

She continued: “This bit didn’t make it to air because I actually ran out, I was stood there and one green ant bit me and I burst into tears and I ran out of the coliseum because I was so embarrassed.

“I was sort of laughing and sort of crying and there was the red curtains and I opened the curtain and I went ‘help me’ and then I ran out and I was so embarrassed.

“That moment I was like, ‘Right, you have got to pull yourself together now because you can’t be running out, you can’t run from the telly, you have to stay there and see it through to the end’.”

Would you have cried in Holly’s position? Leave us a comment on our Facebook page @EntertainmentDailyFix and let us know what you think.