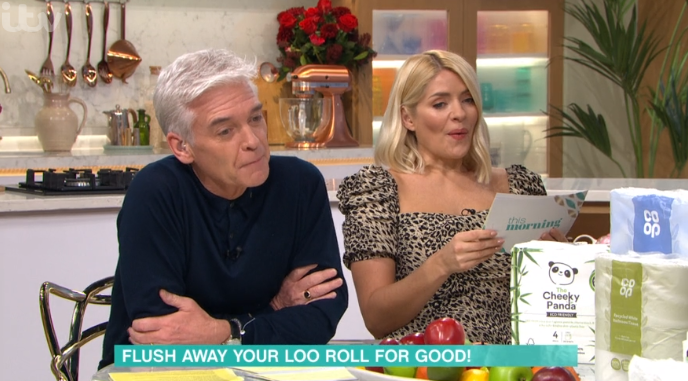 Viewers in hysterics at Holly’s reaction to This Morning discussion on bum wiping and bidets!

She struggled to contain her giggles

Alice Beer was on the programme to reveal different types of toilet roll and alternative ways to using loo roll.

The consumer editor said people should start considering different methods to help the environment as toilet roll is “responsible for 15 per cent of deforestation”.

Speaking about a bidet – a type of sink intended for washing your behind and private parts – Phil said: “I think we’re quite out-of-date with our toilets.

“If you look at the incredible Japanese toilets and some of the ones in posh hotels, it all sorts of happens [for you]. If you have the loo right, there isn’t any need for toilet paper.”

Holly said: “I want to try one! It’s like a little shower inside?” to which Phil said: “They’re really good! Not inside.”

The show’s director then asked the hosts through their earpieces if the bidets have “a blower”, to dry the area.

Sitting back, Holly struggled to contain her giggles over the graphic conversation.

Holly is clearly doing everything she can to not laugh.

Alice said: “It’s very important to either blow dry or pat. There’s a rectal surgeon in the States who thinks that the whole wiping process is very dangerous and bad for you,” as Holly began giggling.

Alice asked: “Shall we move on?” to which Phil said: “No I think this is important!”

Alice then revealed you can buy a £49 kit that comes with cloths which you wipe yourself with before “storing” them in a box and washing them.

Phil was disgusted as he exclaimed: “Get out of here! Give me a better example. Not doing that,” as Alice sighed.

Viewers were amused by Holly’s face throughout the segment.

One person said on Twitter: “@hollywills’ face through this toilet talk,” followed by laughing face emojis.

Another tweeted: “This toilet roll chat on #ThisMorning is HILARIOUS. Holly is clearly doing everything she can to not laugh.”

A third added: “The toilet roll segment was funny.”

This toilet roll chat on #ThisMorning is HILARIOUS. Holly is clearly doing everything she can to not laugh…

Meanwhile on the show today, Holly left viewers in stitches when she got chocolate stuck on her teeth.

Chocolate artisan Paul A. Young appeared on the programme to reveal how viewers could make chocolate pinatas for their loved ones on Valentine’s Day.

Trying some melted chocolate from a spoon, Holly accidentally whacked it onto her teeth as a stunned Phil said: “Straight down the dentist then?”