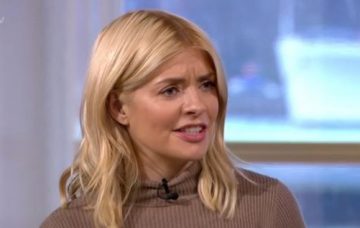 She reckons they need to give lessons!

Holly Willoughby has told Strictly Come Dancing’s Kevin and Karen Clifton that it’s a “miracle” to see them working together so amicably after their separation.

The television host joked the professional dancing duo should give tips to other couples on how to gracefully handle a divorce.

Kevin and Karen, both 35, announced this month they’re separating following three years of marriage, but are still working together on new tour, Kevin and Karen: Dance.

Interviewing the couple on Wednesday’s episode of This Morning, Holly said: “You need to give a lot of people life lessons.

“It’s a miracle to see a couple go through a divorce and actually be able to work and be as grown up about it as you, really.”

“It’s a tough thing to do, but I think we’re both in a good place and really happy and it shows other people you can go through things and continue working with someone you love very much and respect and admire.”

Kevin added: “Dancing is how we met and what our relationship has been based on, what we’ve always done for the last seven years, and what we will continue doing.”

Phillip Schofield then chipped in: “As Holly said, it’s a remarkable achievement, but is it going to be weird, having done a show together and it to be so successful, that euphoria of the first night, then go, ‘see you tomorrow!'”

Karen laughed: “Funnily enough, even on Strictly we hardly ever saw each other!

“We are very professional and love our jobs and it’s not like I won’t ever see him. If we do finish a show, we go back to the hotel with everyone and have drinks. Nothing will ever change.”

They told Holly and Phil there had never been any question of cancelling the tour in light of their separation, as it was planned last year.

Karen said: “Absolutely not. That never really crossed our minds.

“We have been dancing together for seven years and that bond we created as friends, first of all, and then as professional dancers is very strong. So to let go of all that just because our private life didn’t work out the way we wanted it to…”

The couple confirmed their split on Chris Evans’ BBC Radio 2 show earlier this month, following weeks of rumours about the state of their marriage.

“There was this big elephant in the room and normally you deal with those things privately, but obviously being on such a massive show, people were talking about it,” said Kevin.

“We’re quite positive people in general, so rather than hide behind this big elephant in the room, let’s get on top of it and have a ride around. Just say it and be respectful to all the fans who supported us and want to come and see the show.”

Their tour, Kevin and Karen: Dance 2018, kicks off in May. Full ticket details and information can be found on their official website here.

Have you been able to continue working with an ex following a relationship breakdown? Leave us a comment on our Facebook page @EntertainmentDailyFix and let us know your experience.