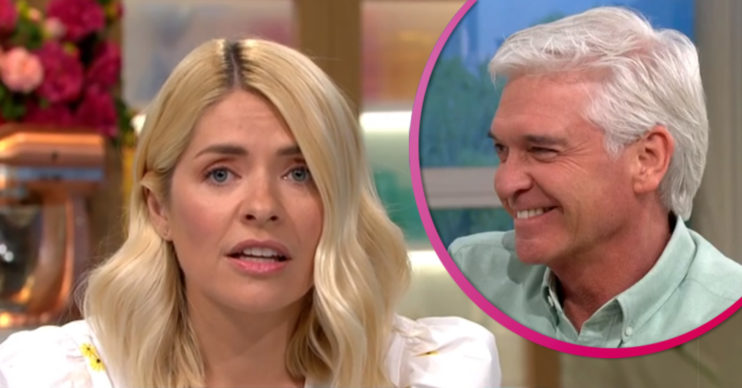 Holly Willoughby shocked as Bradley Walsh pranks her on This Morning

She had no idea he called in to the show

TV’s Holly Willoughby was left horrified after being pranked by Bradley Walsh and his son Barney on This Morning.

The father and son duo called in to the phone-in segment on the show today (April 27) about homeschooling.

Read more: This Morning viewers ask why Holly Willoughby has gone to work dressed ‘as a meringue’

He also yelled at his fictional wife ‘Audrey’ and Holly was left with her jaw on the ground.

Bradley, posing as the caller, also asked Holly whether she was disciplining her “three or four children” and called her ‘Polly’ several times.

What happened during the phone-in segment?

‘Roger’ told Holly and Phillip Schofield: “I do make James wear a shirt and tie.”

His son ‘James’ added: “Dad’s taking it too far. He makes me call him Mr Smythe in the day.

“If I’m not down in the living room at 8am he makes me do detention.

“If I want to go to the loo, he makes me put my hand up. We went on a school trip to the spare room.”

‘Roger’ then interrupted, shouting: “Audrey! Audrey! Get the door.”

He added: “Polly, I understand you have three or four children. If they were to be unruly, you’d have to disclipline them surely.”

Holly looked stunned and replied: “Well… at the moment everyone is going through quite a tough time.

“So mine are behaving quite well.”

As ‘Roger’ continued talking, Holly and Phil cut him off and went to an ad break.

Phil then revealed the prank…

Returning to the show, Holly told viewers: “Just now in our phone-in, we spoke to a family that were having a difficult time in lockdown with homeschooling.

“We have contacted them and we’re just making sure everything’s okay.”

However, Phil then revealed it was actually a prank and Bradley and Barney were behind it all!

Bradley said: “We’re making a show from our shed and it was Barn’s idea to prank call you so that’s what we did,” as he did Roger’s voice.

He added: “I wondered if you had sussed it out at all because twice I called you Polly deliberately.”

Holly joked: “I’ll answer to anything!”

Did you find the prank funny? Head to our Facebook page @EntertainmentDailyFix and let us know.