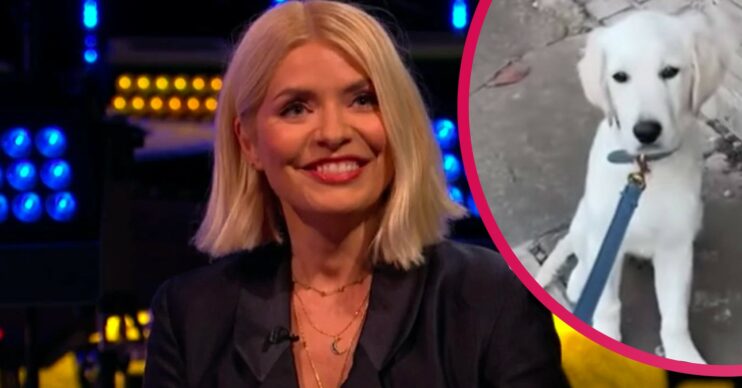 This is just what we needed to see today!

Holly Willoughby has shared a stunning make-up-free selfie of herself in bed with her new puppy, Bailey.

The This Morning star shared the snap on Instagram today (December 14), for her 7.5 million followers to see.

Holly took to Instagram to warm the hearts of her followers this morning with an adorable selfie with her puppy, Bailey.

The Instagram photo shows Holly, who is without make-up, in her pyjamas, lying in bed with her gorgeous golden retriever, Bailey.

Read more: This Morning: Josie Gibson fans gutted as she’s replaced for rest of the week

“Good morning Holly, what a beautiful pic of you and Bailey,” one of her followers commented.

“How beautiful to wake up with that gorgeous baby,” another said.

“Morning gorgeous, and you Holly,” a third fan said.

“What a lovely way to start the day – Good morning Holly,” another of her followers said.

When did Bailey come into Holly Willoughby’s life?

Holly Willoughby revealed to her 7.5 million followers back in November that she had welcomed Bailey into the family. In a brief blog post for Wylde Moon, Holly explained why it was the right time to get a dog.

“My daughter has been campaigning for us to get a dog since she was able to talk, and we have been waiting for the right time for a dog to fit into our family life. Now is that time.

“During lockdown, the kids gravitated to being on screens more than normal, but Bailey came in and pushed a giant paw-shaped reset button for us all…and of course we are completely in love,” she continued.

What else has the star been up to?

Holly’s heartwarming snap of a sleepy Bailey comes after it was reported that she and Phillip Schofield snubbed Eamonn Holmes.

The 62-year-old Irish presenter, who co-presented This Morning between 2006 and 2021, is starting a new gig at GB News next year.

Following the news, Holly and Phillip have reportedly snubbed Eamonn Holmes, and haven’t been in touch to congratulate him about his new job.

A source spoke to The Sun, saying: “They worked together for so long but there’s been no contact since Eamonn parted ways.

In other news, Holly Willoughby and Phillip Schofield aren’t appearing on This Morning this week.

Instead, they are being replaced by Rochelle Humes, Josie Gibson and Vernon Kay.

Holly and Phil will be back presenting on Christmas Day.

What do you think of Holly’s adorable snap?  Leave us a comment on our Facebook page @EntertainmentDailyFix and let us know!