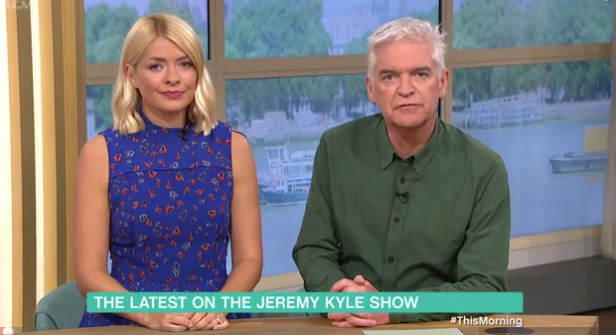 He was found dead after appearing on the show

Holly Willoughby has offered her condolences to the family of Steve Dymond, who died this week following his appearance on The Jeremy Kyle Show.

After reading out a statement on the death from ITV during today’s episode of This Morning, Holly expressed her condolences both to Steve’s family and the programme’s crew, calling it a “dreadful shock”.

She told viewers: “We’d also like to add our condolences to the family of Mr Dymond and also to The Jeremy Kyle team and crew to whom this has been a dreadful shock.”

Her co-host, Phillip Schofield, then chimed in: “There’s no indication yet what will replace Jeremy’s show in the future.”

It comes after Carolyn McCall, the CEO of ITV, confirmed in a statement that the broadcaster had made the decision, due to the “gravity of recent events”, to axe the show for good.

She said:  “Given the gravity of recent events we have decided to end production of The Jeremy Kyle Show.

Speaking to the Daily Mail, Tory MP Charles Walker, a vice-chairman of the all-party parliamentary group on suicide and self-harm prevention, said: “On reflection, ITV would be best advised just to stop it. It’s a very, very unattractive TV show and I’m surprised it’s gone on so long.”

It is understood that Mr Dymond originally approached the show in a bid to prove he hadn’t been unfaithful to his partner, Jane Callaghan.

But he failed the show’s controversial lie detector test, prompting the end of his relationship.

Last Thursday (May 9), following filming, Mr Dymond is believed to have taken his own life.

Are you sad to see The Jeremy Kyle Show go – or was it right for bosses to axe it? Leave us a comment on our Facebook page @EntertainmentDailyFix and let us know what you think.