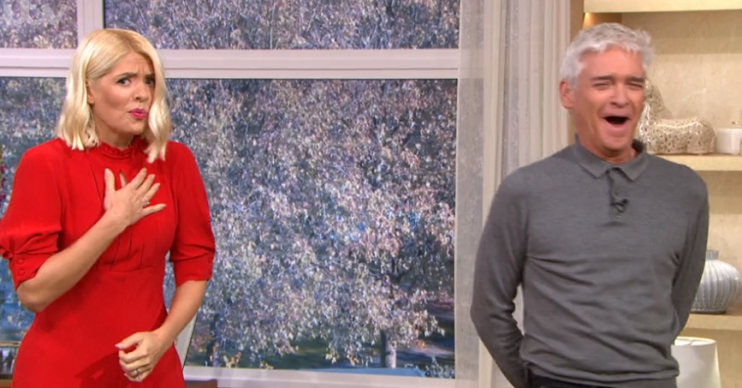 Poor Holly Willoughby walked off This Morning today after her co-star Phillip Schofield played a prank on her.

The hosts were talking to the Loose Women panel to find out what was coming up on the show when Phil decided to scare Holly.

Phil produced a skeleton hand from his sleeve and slowly started to move it towards Holly’s face.

After spotting the creepy hand, Holly stopped reading the autocue and screamed.

She exclaimed: “What are you doing?” as she jumped to the side in fear.

The loose ladies were in hysterics as Ruth Langsford said: “Gets her every time.”

Holly then jokingly stormed off away from Phil, saying: “Right, I’m coming to be a Loose Woman.”

After Ruth revealed what was coming up on Loose Women, Holly said to Phil: “What do you say?”

Phil replied: “Sorry,” to which Holly said: “Thank you,” as the pair laughed.

Right, I’m coming to be a Loose Woman.

It comes after Holly and Phil tested out umbrellas with a wind machine on yesterday’s show and things were quickly thrown into chaos.

The pair were joined by Alice Beer, who presented the best brollies to keep you dry in the rain.

But when they tested the umbrellas against a wind machine, Alice was left blown into a wall and Phil’s umbrella hat was whisked off his head.

Read more: This Morning guest reveals six-year-old adopted girl was actually 22 and tried to kill him

Viewers branded the segment “TV gold” and shared their thoughts on Twitter.

One person tweeted: “That umbrella test was TV gold! Hilarious!” while another wrote: “In absolute stitches watching the umbrella testing making working from home a lot more entertaining.”

A third added: “This umbrella testing in the wind is hilarious and has made me laugh so much, anyway the best thing is not to put up an umbrella in the wind!”