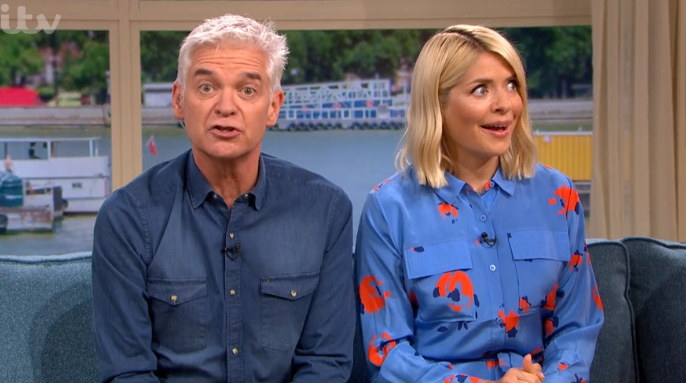 The incident happened live on TV in 2017

Holly Willoughby told off a guest on today’s This Morning after she had her bottom pinched.

During today’s show, the presenter and co-star Phillip Schofield spoke to the Teletubbies and Holly was quick to tell them about a moment when their co-star, hoover NooNoo, pinched her bum.

The programme then showed footage of Holly, who was hosting The One Show with Matt Baker at the time, jumping out of the way when NooNoo made a cheeky pass at her bum.

Read more: Holly Willoughby mocked for looking like a ‘tin of Cadbury’s Roses chocolates’ on This Morning

Holly told the Teletubbies: “Last time we met each other was on The One Show and I have to say, I’m quite happy that today you’ve left NooNoo at home.

“Last time I saw NooNoo this happened,” as the clip showing NooNoo pinching her bottom was shown.

Phil told Holly: “You got goosed by NooNoo!”

Holly said: “Yep… I got goosed by NooNoo! Naughty NooNoo.”

Meanwhile, This Morning viewers jokingly mocked Holly over her outfit for the show today.

The presenter wore a £299 blue dress which featured a red floral print from WHISTLES with a pair of nude heels.

Holly shared a snap of herself posing in the dress on set of the daytime show, alongside the caption: “Morning Thursday… today’s #hwstyle on @thismorning dress by @thisiswhistles.”

Many people loved the look, however, others weren’t so keen and compared Holly to a tin of Roses chocolates.

One person said on Twitter: “#ThisMorning Holly has paid hundreds of pounds on her dress to look like a box of Cadbury’s Roses.”

Another agreed, saying: “Holly looks like a tin of Cadbury’s Roses #jeremykyle #thismorning.”

Read more: Holly Willoughby mocked for looking like a ‘tin of Cadbury’s Roses chocolates’ on This Morning

Chef Phil told Holly: “I know you’re a bit… hungover,” to which she gasped and replied: “Phil Vickery!”

She added: “We had the Celebrity Juice wrap party last night. That’s all. So the smell of haddock in the studio is not helpful.”