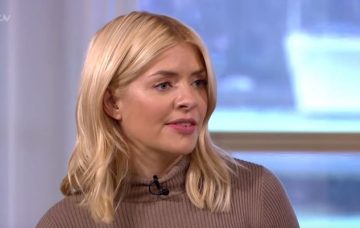 Presenter admits she was reluctant to discuss it

And yet, This Morning failed to comment on the presenter’s brush with the law, leaving some viewers questioning whether the show was giving Ant special treatment – he is, after all, a good friend of Holly Willoughby and Phillip Schofield.

However, Holly has now come out and rubbished those claims, insisting there was a very good reason why they kept schtum about Ant’s arrest.

Holly, 37, told the Guardian: “Everybody knows that Ant is a very good friend of mine and I’ve known him for a very long time.

“To be honest, on that first day, nobody knew what had happened – and, you know, it’s an ongoing police case right now.

“It’s not something anybody should be talking about. Out of respect for him – I love him to bits – it’s not something that I find very easy to talk about. Because it’s a friend. His is not my story to tell.”

Ant, 42, was taken in by police on the 18th of March after crashing his Mini into two cars in Richmond, South West London.

Police later said that the Britain’s Got Talent presenter was twice the drink-driving limit.

But while the incident was covered by all the newspapers – not to mention Good Morning Britain – Ant’s ITV stablemates at This Morning remained silent.

And some viewers thought there was a case of double standards going on.

The ITV breakfast show had, after all, made a big deal of the recent incident that saw Sky Sports presenter Jamie Carragher suspended from the station for spitting at a football fan’s car.

One viewer fumed on Twitter: “Not blaming presenters but This Morning are hypocrites by not making arrest of Ant McPartlin a main story today.”

And another scathed: “I look forward to seeing what Holly & Phil (both same agents as Ant) do regarding Ant McPartlin. Oh, that’s right! No mention. Because spitting at a car is way worse than DUI.”

To be fair, Holly and Phil did address the Ant situation on the following day’s programme.

Looking gravely at the camera, Phil said: “Let’s start with the events at the weekend. This is difficult for us – we’re talking about a friend here.

“Like many people, we are shocked and saddened by Sunday’s incident involving Ant.”

His co-star added: “We can’t say much more because the matter is still being investigated by the police.”

Were Holly and Phillip right to keep quiet about Ant’s arrest? Have your say on our Facebook page @EntertainmentDailyFix!