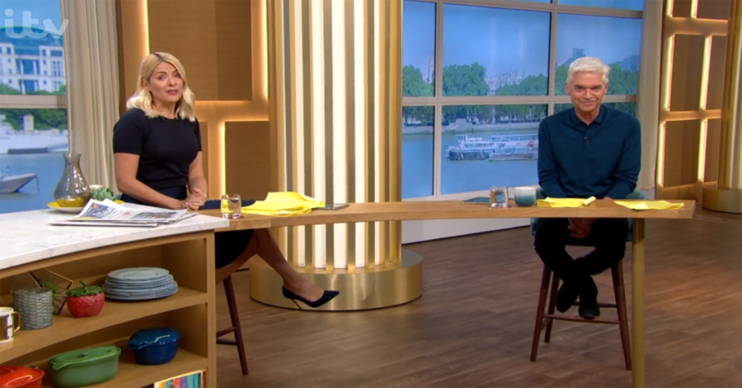 Holly Willoughby replaced by Davina McCall on This Morning

Holly is with her children today

TV’s Holly Willoughby has been replaced by Davina McCall on This Morning today.

The presenter usually hosts the show with Phillip Schofield from Monday to Thursday.

However, on Monday, Holly took the day off because her children were going back to school.

At the start of the programme, Phil told viewers: “Welcome to a new week on This Morning,” as he looked at Davina.

Holly is taking her children to school today.

Viewers were thrilled to have Davina on the show.

Welcome to your Monday #ThisMorning with @Schofe and @ThisisDavina! 🙌

If you're wondering where @hollywills is – here's the explanation!

Another wrote: “Awww davina on #thismorning Holly’s w/ her kids.”

One added: “I love that #BBUK legend Davina is hosting #ThisMorning today.”

However, others weren’t impressed and wanted Holly back.

Another said: “DAVINA!! It’s a TURN OFF FROM ME!! Can’t cope with that AWFUL SCREECHING!!”

Last week, Phil scared Holly as he insisted he “likes to live dangerously” on the set of the daytime show.

Taking to his Instagram Stories, Phil, 58, shared a clip from the This Morning studio that he took on his phone between filming.

In the video, Phil declared: “I’m living dangerously,” before angling the camera upwards.

It showed the show’s massive Spin To Win wheel.

“There’s the Spin to Win wheel,” he explained. “Holly doesn’t like me going anywhere near it.”

Holly, clearly terrified, interrupted him, saying: “I don’t like you going anywhere near it. Don’t!”

As it started swinging, Holly said: “Have you not seen Road Runner? Where the boulder comes down… Oh my god, get out! It’s actually shaking.”

Phil added: “You’ve got to live a bit dangerously!”

Do you like Davina hosting This Morning? Leave us a comment on our Facebook page @EntertainmentDailyFix and let us know what you think of this story.