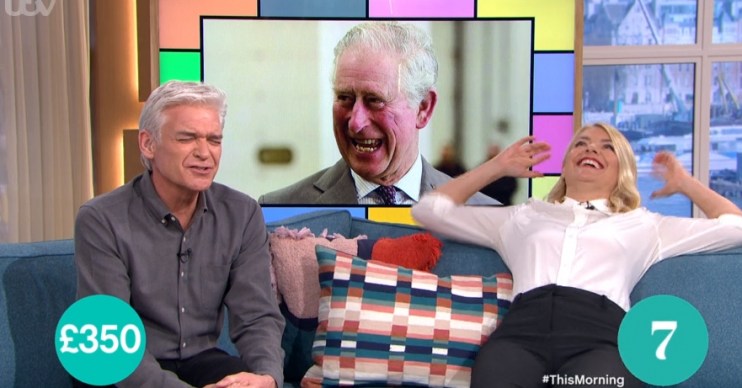 She said she finds the game "stressful"

TV’s Holly Willoughby burst into hysterics as she accidentally forgot who is next in line to the throne.

During a game of It’s Behind You on Tuesday’s This Morning, the presenter became flustered as a viewer gave she and Phillip Schofield clues about Prince Charles.

As Phil and Holly faced towards the camera, a photo of the Prince of Wales popped up on the TV screen behind them and the viewer began giving them clues about who it was.

The viewer said: “He’s next in line to the throne.”

Phil said: “Charles! Charles!” as Holly put her hands over her face and collapsed onto the sofa.

As they ran out of time, Phil said: “You named practically every male member of the royal family.”

Holly said: “I find it stressful that game.”

It comes after viewers called out the show yesterday after Holly was told she got a maths calculation wrong during the game.

You named practically every male member of the royal family.

Bursting into giggles, Holly said: “My maths is so bad!”

However, it was later revealed that Holly had actually added up the totals correctly and it was in fact £1,200.

Viewers called out the show on Twitter with one person tweeting: “Why did they tell @hollywills she calculated the money won on Its Behind You incorrectly? She was right god damn it!!! 500+350+350= £1200.”

After an advert break, Holly was told she was actually correct and told viewers her director Barry was the one who made the blunder.

She said: “I’m feeling very smug, I’m going to enjoy this moment. I said it was 1,200 and then I got told by Barry the director in my ear that I got it wrong.”

Phil added: “He said 1,300 so loud and confident and it was wrong. Barry… so I followed him down the rabbit hole and look what happened… well done [Holly].”