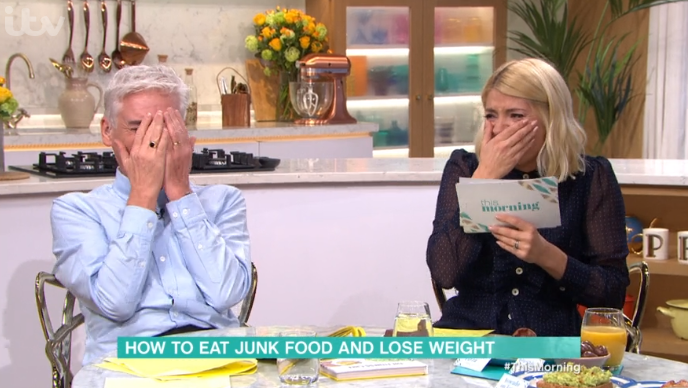 They were suffering a hangover on today's show

Viewers of This Morning were left unimpressed by Holly Willoughby and Phillip Schofield‘s antics on the show today.

The pair admitted they were suffering from sore heads after celebrating a little too hard at last night’s National Television Awards.

The daytime show won an award for Live Magazine Show and the pair continued to celebrate the news on this morning’s programme.

While many viewers found the pair’s antics hilarious, others weren’t pleased when it came to one particular segment.

The duo interviewed nutritionist and social media star Graeme Tomlinson to discuss how you can still enjoy your favourite treats and lose weight.

But it wasn’t long before Holly and Phil got the giggles after she put too much chocolate into her mouth.

Trying to move the conversation on, Phil asked Graeme: “Where did we get too?” as Holly apologised and tried to compose herself.

Graeme went on to explain that there are more calories in a green smoothie than a glass of Coca-Cola.

You have to come back another time when we’re a bit more sensible.

Holly explained: “Really?!” to which she and Phil burst into laughter.

Holly said: “I’m really trying,” to which a giggling Phil added: “Graeme I am so sorry.”

He told Holly: “You haven’t heard a word he’s said,” as she fanned herself and shook her head.

Graeme seemed to find it funny and jokingly offered Holly a Big Mac.

Phil added: “You have to come back another time when we’re a bit more sensible.”

Some viewers watching weren’t impressed and branded the pair “rude” and “unprofessional” towards Graeme.

One person said on Twitter: “#ThisMorning how rude of Holly and Phil. That poor guy. Totally unprofessional.”

Another agreed: “Poor bloke on #ThisMorning, trying to explain his book and help people. So rude!”

#ThisMorning how rude of Holly and Phil. That poor guy totally unprofessional.

Poor bloke on #ThisMorning, trying to explain his book and help people. So rude! 😠

A third tweeted: “Sorry but I think Holly and Phill are being really rude on this item, not funny any more, poor bloke is trying to explain his book.”

Sorry but I think Holly and Phill are being really rude on this item , not funny any more , poor bloke is trying to explain his book #ThisMorning

Read more: Phil and Holly giggle as OAP, 80, gets graphic about sex with toyboy

Others found Holly and Phil hilarious.

A hungover @hollywills And @Schofe Is the best morning tv 😂 #ThisMorning

I absolutely love watching @thismorning the morning after the NTA awards! It has to be the funniest episode #funny #thismorning @hollywills @Schofe